Home » Insect » Are Earwigs Dangerous? Should you Be Afraid?

No, earwigs are not dangerous. Their large pincers often give off the perception that they are dangerous and aggressive. This is a common misconception.

While they do have pincers and they can pinch you, the pincers are not venomous, nor can they break human skin.

Earwigs are primarily a nuisance pest that won’t cause harm to humans, children, or animals. 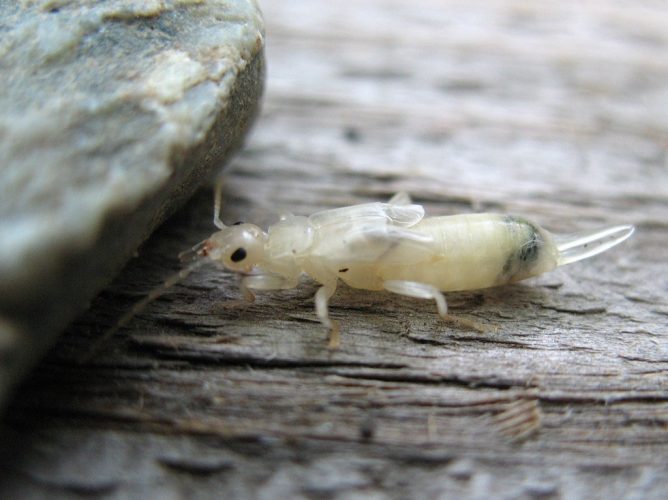 Like other earwigs, they have pincers, but they are not venemous, nor can they break human skin.

When an earwig is white is actually going through a molting phase.

Earwigs molt like man other insects because this allows them to grow. They shed their exoskeleton during the molting process, and under the exoskeleton, their bodies are white.

At this stage, the earwigs are defenseless until they grow a new exoskeleton and their color returns. 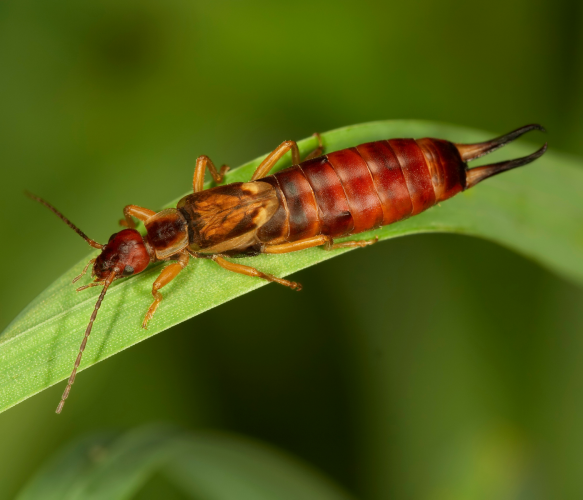 No, brown earwigs are not dangerous.

Earywigs can vary in color from light brown to dark brown to reddish-brown.

If you encounter a brown earwig, it’s likely a common earwig.

These earwigs have pincers, but they are not venomous. While they can bite, the pincers are strong enough to break the skin or cause serious damage.

No, black earwigs are not dangerous.

Earywigs can vary in color from light brown to dark brown to reddish-brown. In some cases, they can reach very dark brown colors that make them look black.

A black earwig is no different than any other earwig.

They have pincers, but they are not venomous. Also, although they can snap with their pincers, they won’t cause serious damage or much of any pain.

The common earwig is not venomous. While they can bite, their bites are not painful, nor can they break the skin.

No, European earwigs are not dangerous.

European earwigs are similar to species of earwigs in the United States.

Do earwigs actually go in your ear?

No, earwigs don’t hide or lay eggs in human ears. Although they are small enough to fit, there are no reports of them hiding or entering into human ears.

There are also myths or claims that earwigs will feed on the human brain. This is another unfounded claim with no evidence.

Are Earwigs Dangerous To dogs?

In most cases, even if an earwig attempts to bite your dog, they most likely won’t feel it. Dogs are often bitten on the face or nose area since they usually inspect insects with their nose.

Even when bitten around their nose or face, this will cause little to no pain to your dog.

Earwigs don’t have any venom or dangerous substances on their skin, so your dog will be safe if they eat an earwig.

Are Earwigs Dangerous To Cats?

Their pinches won’t cause much or any pain to your cat if it’s bitten.

It’s also expected that your cat might try to eat the earwig. The fast movements will attract your car.

If your car does eat an earwig, you have nothing to worry about. There is no serious concern if your cat eats an earwig since they have no venom or dangerous substances.

Are Earwigs Dangerous To Rabbits?

Their bites won’t cause much or any pain to your rabbit if it’s bitten.

With that in mind, earwigs shouldn’t be in the same enclosure. Rabbits should and typically won’t eat insects.

Leaving earwigs with rabbits provides no benefit. It only increases the chance they get bitten.

Are Earwigs Dangerous To Eat?

No, earwigs are not dangerous to eat.

First, they are not venemous. They are also not known to carry any dangerous substances on their body.

While they are not known to emit any diseases or toxic substances naturally, they can pick up these dangerous substances when walking outside.

Whether you eat earwigs on accident or purpose, they are entirely safe.

Are Earwigs Dangerous to Babies?

Earwigs are not dangerous to humans or babies.

Earwigs are not venomous, nor can they cause severe pain or damage by biting.

In either case, earwigs should not be allowed to be near babies. While they won’t hide inside ears, you should keep these insects away from your baby.

Are Earwigs In The House Dangerous?

Earwigs infestations can grow large. Having these insects infesting your home is more of a nuisance, but they can start infesting unwanted areas such as wood or storage bins over time.

To prevent this, you should eliminate any earwigs you find inside your home.

Are Earwigs Helpful or Harmful?

They are often referred to as sanitary engineers because they help clean up the environment and speed up the decomposition and life cycle outdoors.

Indoors earwigs are more of a nuisance than harmful.

With time infestations can grow large and unsightly. Not to mention that seeing these fast little insects crawling all over your home is not welcoming or ideal.

Keep earwigs outdoors, and they will help your garden but don’t let them make your house their home.