No. Ladybugs aren’t poisonous to humans. They do secrete toxins from their skin that are often confused with urine or feces.

The liquid they secrete is used as a defense mechanism to protect themselves from predators. Fortunately for humans, the toxins in the liquid aren’t dangerous.

The liquid is toxic to some animals, such as:

Allergies to ladybugs are possible and quite common in regions where they infest in large numbers.

Ladybugs do bite, but their bites are harmless, and they don’t transmit any diseases or toxins through their bite. Their bites feel like a small pinch; they won’t break the skin or cause much pain.

Are Some Ladybugs Poisonous?

The liquid they secreted by any species of ladybug isn’t potent enough to cause any damage to humans.

Some ladybugs can be dangerous to certain animals more than others.

For example, certain species of black ladybugs are more toxic to lizards than orange or yellow ladybugs.

Likewise, the orange ladybug is more poisonous to insects than the traditional native red ladybug.

While these differences have no impact on humans it does affect other insects and animals. 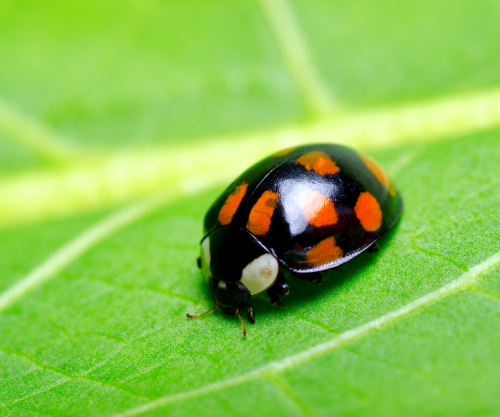 No, black ladybugs are not poisonous to humans.

Although they are harmless to humans studies show that some species of black ladybugs have some of the highest levels of toxins relative to other ladybugs.

There is one black ladybug that has proved to be more toxic than other ladybugs.

The black pine ladybug is shiny black with several red spots on its back. They are commonly found on pine trees but also a wide range of other plants.

These ladybugs are dangerous to most insects and lizards but still relatively harmless to larger mammals and insects. 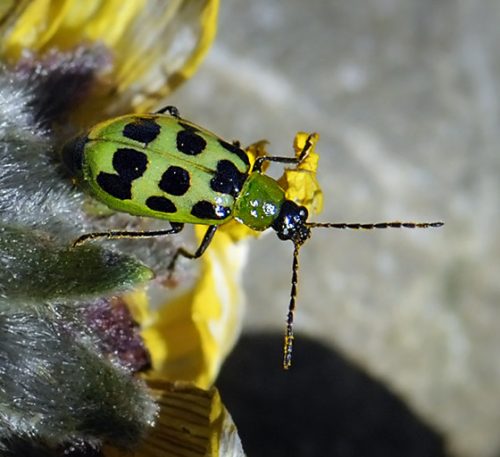 If you see a green ladybug in your yard or home it’s likely a cucumber beetle.

Cucumber beetles are not poisonous but they are known to transmit bacteria. They are also highly destructive crops.

These battles tend to infest gardens and farms where melons and other fruit are present. They are common in the rocky mountains and in the Southern United States.

They are not as common as ladybugs but if you live in regions with plenty of farms or have your own garden they can venture out. 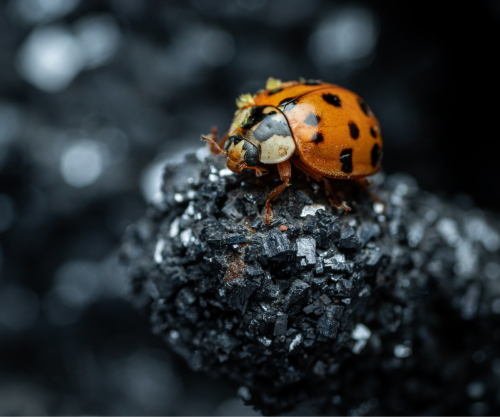 No, orange ladybugs aren’t poisonous to humans, but they are toxic to other smaller insects and animals.

The orange ladybug is commonly referred to as the Asian Lady Beetle. The Asian lady beetle is an invasive species in the United States that often infest areas in the thousands to millions of bugs.

Individually the toxins they release are harmless to most animals but if they are consumed in large numbers they can harm larger mammals and reptiles.

They pose one of the largest threats to animals and insects due to their invasive and large numbers. 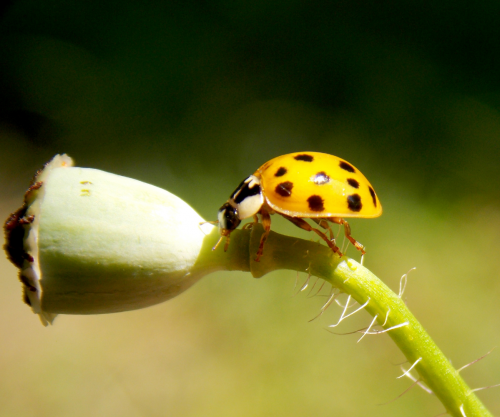 In fact, no native species in the U.S is yellow. It’s possible that some species of yellow or red ladybugs might produce yellow offspring. If this is the case you will likely see other red or orange ladybugs nearby.

You won’t encounter an infestation of yellow ladybugs in the U.S.

These ladybugs just like other ladybugs can secrete toxins but they are not dangerous to humans. 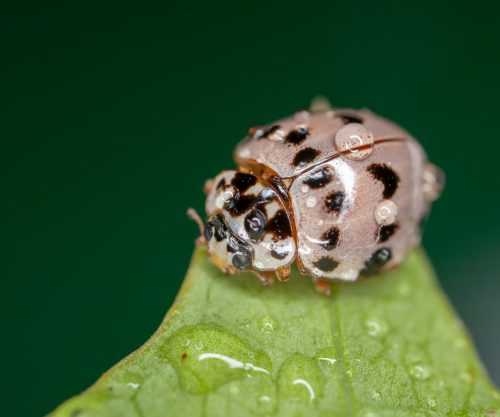 While they can secrete toxins they aren’t dangerous to humans. White ladybugs are technically Ash Grey Lady Beetles and are often considered grey ladybugs.

There are no reports of these ladybugs being less or more poisonous than other ladybugs.

Their secretions are dangerous to small insects and some species of lizards.

There is no difference between white and grey ladybugs. There is just a slight difference in the shade of the ladybug.

In either situation, white and grey ladybugs are poisonous to small insects and animals. To larger animals and humans the potency of the toxins is not harmful. 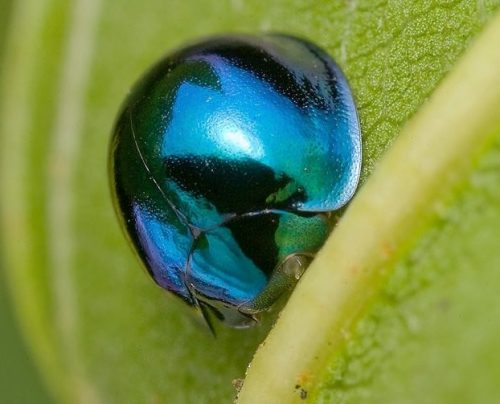 These toxins are typically only harmful to smaller insects and animals. They are completely harmless to humans and most mammals.

Blue ladybugs are native to Australia and New Zealand and are only found in California and Hawaii in the United States.

Are Ladybugs Poisonous If You Eat Them?

Yes, ladybugs are poisonous if you eat too many. If you accidentally eat a single ladybug, they are harmless, so there’s no need to panic.

But avoid eating a bowl of ladybugs.

The chemical that ladybugs secrete is called cantharidin. Cantharidin is a burning agent that can have toxic effects when ingested in large doses.

Are Ladybugs Poisonous To Dogs?

Ladybugs are not typically poisonous or dangerous to dogs.

There is an exception: an invasive species of Asian ladybugs that highly resemble ladybugs can be dangerous to dogs.

They pose a unique danger to dogs because they invade in such large numbers. This makes it easy for dogs to consume them in large numbers as well.

When consumed these ladybugs can attach to the roof of their month and leave chemical burns and blisters in their mouth.

If there is an invasion of lady beetles near your home, keep your dog indoors or do what you can to prevent your dog from eating them.

If these ladybugs land or fly around your dog, they are completely harmless.

Are Ladybugs Poisonous To Cats?

Cats naturally prey on insects and other small rodents. Common ladybugs are typically not poisonous to cats.

There is a species of ladybugs called the Asian Lady Beetle that can be poisonous to pets. If these beetles are consumed in large numbers, they will attach to the roof of your cat’s mouth and cause ulcerations.

If they are consumed, they can also cause vomiting, diarrhea, and loss of appetite.

Most reported cases involve dogs, but it’s expected that the same reactions will happen if cats consume Asian lady beetles.

Are Ladybugs Poisonous To Lizards?

Most species of lizards will avoid eating ladybugs because of the strong smell and foul taste they produce. While lizards may eat ladybugs once, they will very rarely consume them again unless they are starving.

Are Ladybugs Poisonous To Bearded Dragons?

If you do feed your breaded dragon ladybugs you should start with one and then monitor for the next few hours to one day. If there are no side effects you can incrementally feed your bearded dragon more ladybugs.

Remember that the toxins inside ladybugs are a burning agent and can be highly toxic in large doses. Always air on the side of caution when feeding your bearded dragon.

Are Ladybugs Poisonous To Spiders?

No, ladybugs aren’t poisonous to spiders. Spiders are one of the few insects that commonly eat ladybugs.

While other insects avoid ladybugs because of the foul smell and toxic liquid they release, spiders don’t mind.

Spiders commonly consume ladybugs without regard for any of the ladybugs’ defense mechanisms.

Yes, ladybugs can and will bite if they feel threatened. The bite of a ladybug is typically compared to a slight pinch.

Overall these bites are harmless to humans and most pets. Biting is not a common defense mechanism compared to their reflex bleeding.

Reflex bleeding is a defense mechanism where ladybugs secret blood that contains toxins. These toxins are typically harmless to larger mammals and humans.

Ladybugs are not harmful to humans. Some humans are allergic reactions that can cause a runny nose, watery eyes, and skin irritation.

While ladybugs can bite, these bites are harmless. They don’t cause any pain or spread disease.

The most harm that ladybugs will cause will be to your home or belongings. Ladybugs secrete a red, orange, or yellow liquid that can stain fabric, wood, and other surfaces.

These stains can cause extensive damage when large infestations invade homes or structures. These types of infestation are highly common when dealing with Asian lady beetle infestations.

These ladybugs can invade homes and structures in the thousands and even millions.