Home » Insect » Clover Mites Vs. Chiggers: Everything You Need To Know

Not sure if you have  clover mites or chiggers?

Don’t worry. We’ve got you covered.

We know that treating these small, crawling critters in your home is difficult without knowing which one are you dealing with.

To help out, I’ve decided to list down all the information you need to determine if you have chiggers or clover mites and what you should do if you have each one. 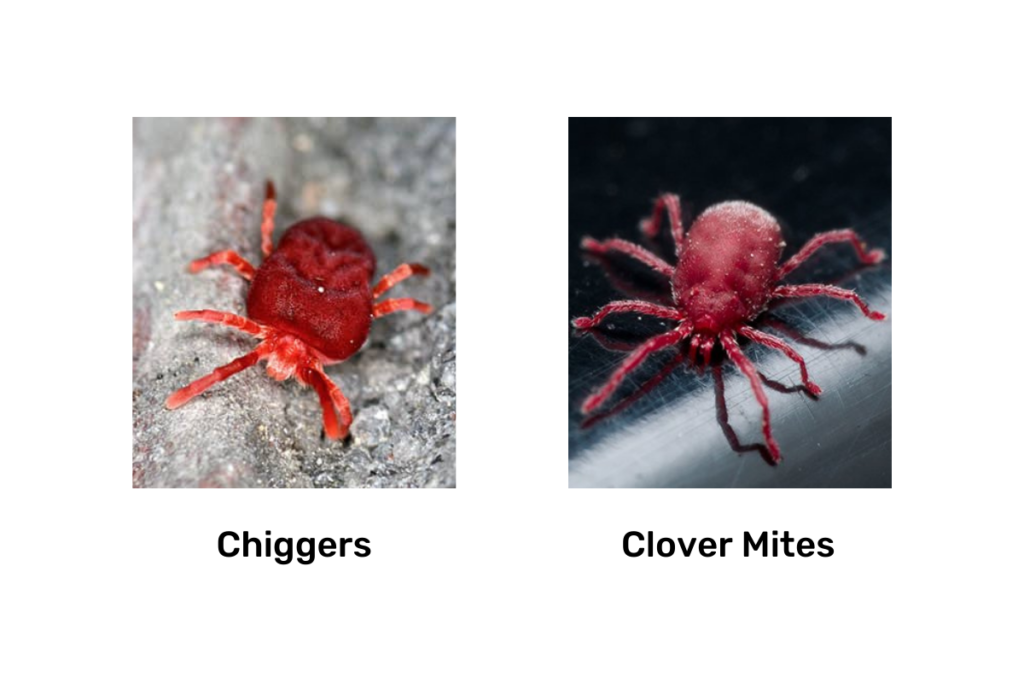 Chiggers and mites are often confused because they look very similar. But there are some key things you can look for to tell them apart.

Shape: Both chiggers and clover mites are oval-shaped, have six legs as larvae and eight legs as adults. Chiggers are known for their long legs that resemble antennae.

Color: Clover mites and chiggers are both reddish. With the exception that Nymph chiggers are typically yellowish.

In What Region do Clover Mites Live?

Clover mites are found across the world. Since they feed plants and vegetation as adults, they are adaptable and can live in most places around the globe.

They are found in North America, South America, Europe, Asia, Africa, and Australia.

In What Region Do Chiggers Live?

Like clover mites, chiggers are well adapted to live across the globe.

Chiggers can be found in Africa, Australia, Asia, the Caribbean, South America, and North America.

Regardless of the region, chiggers prefer to live in areas where there is sufficient grasslands or vegetation.

They like areas with low vegetation such as forests, grasslands, woodlands, bushes, orchards, lakes, and streams.

In cities, they are common in lawns, parks, fields, and golf courses.

Where Do Clover Mites Hide?

They live anywhere there is sufficient vegetation. This includes lawns, ivy, grasses, fruit trees, and any other plants or flowers they can consume.

While clover mites generally live outside, they are known for migrating inside structures in large numbers.

This migration happens when their food source is removed, or there is a lack of water.

They also migrate inside when the temperature gets colder for warmth.

Since they are tiny, clover mites get in through cracks and crevices on buildings.

Because they migrate in large numbers, making it easy to spot large red-brown patches moving towards or on buildings.

Where Do Chiggers Hide?

They tend to prefer low vegetation because it makes it easy for them to attach their larva to mammals. Their larva needs blood, so they need to be attached to a host.

Adults eat vegetation as their primary source of food. They do not drink blood.

Unlike clover mites, chiggers do not migrate indoors.

They can live indoors for short periods. And only get indoors by hitchhiking on humans.

What Do Clover Mites Eat?

While most most people assume clover mites drink blood, they don’t.

Clover mites consume plants to survive. They suck the juices from grass, plants, and trees to survive.

Clover mites can feed on 200 different plants. This includes grass, trees, shrubs, flowers, crops, and any other plants.

They are said to prefer clover plants if they are available. But, they have no problem surviving on different vegetation.

Due to their varied diet, they are highly adaptable. They can live almost anywhere vegetation is present.

What Do Chiggers Eat?

Chiggers are unique because the adults and larvae consume drastically different diets.

Their diet can range from leaves, rotting wood, fruit, or any other organic material. They can also consume small insects in the soil.

Chiggers larvae, on the other hand, consume blood.

The larvae need blood to mature into an adult. They will die if they don’t consume blood for 50-70 days.

Interestingly, Chigger larvae do not consume blood like a mosquito or a bed bug, which directly withdraw blood from the capillaries. Instead, Chiggers use an enzyme that destroys tissue; the larvae hen consume the liquified skin tissue.

Clover mites do not bite. They are not known to cause harm to humans or pets.

Clover mites do not bite because they do not consume blood.

Also, they do not have the anatomy to be able to bite humans. 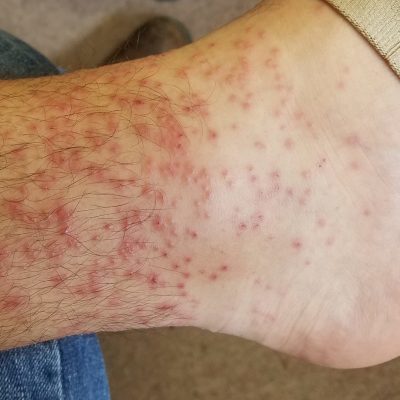 Adult Chiggers do not bite, but their larvae do.

This blood can be from both humans and your pets.

Dogs and humans are commonly bit by chiggers because they are the most likely to come in contact with them.

Chiggers typically hide in large numbers and wait in low vegetation, waiting to latch on to any warm-blooded animal that walks by.

They effectively find a host because they are highly sensitive to movement and can detect the CO2 exhaled from their host.

Once attached to a host, they use enzymes to destroy the skin tissue of the host.

The hardened skin creates a feeding tube that the chiggers insert their feeding structure into to consume the liquified tissue.

The bites are also typically itchy and uncomfortable to most.

Once attached to a host, chiggers will typically only stay attached for several days, if possible, before they release.

In most cases, chiggers will fall off before then because they are quite fragile and easy to remove.

Also, chiggers commonly fall off before several days pass due to the itching that their bites cause.

Can Chiggers and Clover Mites Fly?

Both chiggers and clover mites can’t fly and don’t have wings at any stage of their life cycle.

These insects both travel with their legs.

That said, Chiggers may sometimes hitchhike on mammals to get around.
Overall, clover mites are much more agile and capable of moving than chiggers.

What Dangers Do Clover Mites Pose?

Since clover mites do not bite, they are generally harmless to humans or pets.

The main danger that clover mites pose to humans is allergic reactions and asthma attacks.

When they enter your home, they produce residue and particles that enter the air.

These can cause mild irritations to extreme asthma attacks depending on the person’s allergy level.

Minor cases can result in the common symptoms of allergic reactions such as sneezing, runny nose, itchy eyes, and skin rashes.

Clover mites are small and do not pose any structural damage. The main damage they can cause is the red stains they leave when they get smashed.

What Dangers Do Chiggers Pose?

Their bites can cause severe itching. Although these bites don’t spread diseases, scratching can result in infections.

That said, infections are rare. In general, the bites heal in two weeks.

The more serious dangers that chiggers pose are the number of bites they can cause.

Chiggers often hide in large numbers on lawns or other grass patches. It’s possible to end up with hundreds of chiggers on your body after walking through the grass.

They also pose the same dangers to pets such as dogs and cats if they frequent the outdoors.

What is the Life Cycle of Chiggers?

When the temperatures begin to rise, adult female chiggers will lay eggs. They lay around one to five eggs per day.

They typically place their eggs in leaf litter, vegetation, and lawns.

After about one week, the larva will emerge as 6-legged larvae.

The larva then needs to feed on the blood of mammals. They do this for around two to four days. The larva then leaves their host and drop into the soil for about one to two weeks.

The larva then molts into nymphs. Over the next several weeks, the nymph will continue to molt until it reaches an adult.

What is the Life Cycle of Clover Mites?

Clover mites are unique in that they are parthenogenetic.

Clover mite populations are composed entirely of females and can reproduce from unfertilized eggs.

They lay their eggs in spring and place them where they receive enough sun.
This will allow them to survive winters.

The eggs hatch and the first phase of immature clover mites begin eating on plants.

After about one week, the immature will progress towards the second immature phase.

The final stage is when the immature nymph reaches an adult.

This typically takes around two weeks.

Adults live for around two weeks outdoors if conditions are suitable.

Overall, one generation of clover mites typically only survive one month.

Eggs laid in the late spring lay dormant in the hot summer and hatch in the fall.

After hatching, immature clover mites begin to feed on plant juices and pass through their life cycle (two immature stages and adult) over the course of a month.
These adults lay eggs which overwinter, but all stages of clover mites may be present in the wintertime

How To Get Rid of Clover Mites and Chiggers?

Vacuuming is a great way to get rid of clover mites without smashing them and staining your home.

Since clover mites do not live very long, they will die shortly afterward, even if you miss a few.

To keep clover mites out of your house, seal any cracks and crevices.

Inspect your home and apply caulk to any cracks or crevices you see.

Since clover mites are extra small, seal up even the smallest cracks you see.

It’s also an excellent idea to weather-strip your home.

This will help you create seals on your doors and windows to prevent clover mites from getting inside.

The last thing I’d recommend you do to eliminate clover mites in your yard is to use a residual insecticide such as Bifen I/T.

You can spray this on your home and on your yard and eliminate a large variety of insects that infest homes.

If you have a garden and want to use a more natural alternative, then you can use Diatomaceous earth.

You can combine DE with water and spray the mixture over your yard.

Once the DE dries and the clover mites begin to walk over the substance, it will start taking effect.

After about a week, the DE will break down the exoskeleton, and the clover mites will begin to die.