In ideal conditions, fleas can live for as long as one year.

On average, fleas reach adulthood after two weeks to one month, in ideal conditions.

Ideal conditions for the flea’s lifecycle are a modest 70-85 degrees Fahrenheit with at least 55% humidity.

In suboptimal conditions, fleas can take as long as 2-3 months to reach adulthood.

How Long Do Fleas Live on Humans?

First, fleas don’t live on humans because we don’t have enough hair for them to hold onto like other animals.

They use fur as protection and as a way to move around. Without it, they are vulnerable, can’t reproduce, and often fall off easily.

Another issue is that human blood is not an effective source to reproduce and lay their eggs.

A study found that fleas would have to feed on humans for 12 hours straight to lay eggs.

This means that even if fleas could live on humans. They would eventually die naturally without the ability to reproduce.

How Long Can Fleas Live Without a Host?

Since fleas need to eat constantly, removing the host can be an effective way to eliminate adult fleas.

Unfortunately, fleas have developed a system to survive. They can remain in their cocoon in a sleep-like state until they detect a host.

How Long Can Fleas Live in Carpet?

If fleas have a host near or on the carpet, such as dogs or cats, fleas can maintain and grow their population inside the carpet.

Without intervention, they can maintain their population on the carpet.

In carpets, fleas typically have no issue laying eggs. In addition, inside homes offer favorable conditions that allow fleas to hatch quickly and begin the cycle again.

How Long Do Fleas Live on Furniture?

If fleas have a consistent food source on the couch, fleas can survive between two and three months.

If there is not a food source and the fleas hitchhiked their way on your furniture, they will only survive around ten days or less.

A common misconception is that fleas will only live on fabric. Fleas can live on wood or other surfaces that have little cracks, crevices, or seams that offer them protection.

Fleas will stay hidden until they detect a host and will try to jump on and survive on the host.

How Long Can Fleas Survive After a Bug bomb?

If a bug bomb is effective, fleas that come in direct contact with sufficient insecticide during the bombing will die the same day, typically in less than 3-5 hours.

Fleas who receive direct contact with small amounts of insecticide will typically live less than 2-3 days.

Fleas that don’t receive direct contact during the initial bombing will eventually walk over the insecticide. If the insecticide has a residual effect, the fleas will typically die in 3-6 days.

Flea eggs will survive the initial application of a bug bombing because the egg’s exterior protects the flea inside.

If the insecticide has not been cleaned, fleas that hatch will die within a few days of coming into contact with the residual insecticide.

The residual effect of a bug bomb can last anywhere between one week and one month, depending on the quality of the bug bomb.

Can fleas survive in a hot car?

On the other hand, at 95 degrees fleas will die after around 12 hours if humidity levels are 2%.

Temperatures inside a car are typically around 40 degrees hotter than the outside temperature after around one hour.

This means that if it reaches 90 degrees outside for around one hour. The temperature inside the car will reach 130 degrees.

In most cases, this will kill a flea in around six hours or less.

Flea eggs and larva are more vulnerable to heat. They can typically only survive for one hours in temperatures higher than 105 degrees Fahrenheit.

Temperatures inside a car are typically around 40 degrees hotter than the outside temperature after around one hour.

This means that if it remains around 80 degrees outside for more than one hour most larva and eggs will die.

How Long Can Fleas Live In a House Without Pets?

Fleas can live out their entire life inside a house without pets if they are feeding on humans.

Feeding on humans, fleas can survive between two and three months.

Although feeding on humans will extend their lives, they can’t reproduce on human blood.

This means that after two to three months, the population of fleas will die off.

Without a human host, fleas will live around two weeks or less, depending on the conditions.

How Long Car Flea Larvae Survive Without A host

Fleas larva can survive for two to three weeks without a host. This is because larvae don’t feed on blood and they don’t require a host.

Flea larvae feed on organic material. They live for anywhere between 14 to 20 days before creating a cocoon to enter their pupa state.

After leaving the pupa state, they will become adult fleas ready to feed on blood. Their pupa state can last anywhere from several days to as long as a year.

How Long Can Fleas live In a House?

With a host, fleas can live in a house their entire life. If they can feed on a host that allows them to reproduce, fleas can establish their entire population inside your house.

Without a host and without feeding on humans, adult fleas will only survive three to ten days, depending on the conditions. Hotter and dryer conditions will cause the flea to die much faster.

With a host that doesn’t allow them to reproduce, such as humans, fleas can survive around two to three months.

Human blood will extend the flea’s life, but it won’t allow them to grow their population.

Once all the adult fleas have died to population will also die off.

How Long Can Fleas Live Inside Your Clothes?

Fleas can live on your clothes for two to three months if they are feeding on you consistently.

If your clothes are stored, and the fleas can’t feed on you, they will only last three to ten days.

Finally, if the fleas live inside your clothes and feed on the correct host, they can survive up to two to three months.

With a proper host, not only will they survive longer, but they will be able to lay eggs and grow their population.

How Long Do Fleas Live After Frontline?

After applying Frontline flea treatment, many fleas will die within 60 and 84 hours of the initial application, but the treatment remains effective for between three and four weeks.

Frontline is a popular flea treatment for pets. However, this treatment is not effective until twelve hours after application.

This is because frontline drops are applied to the skin behind the shoulder blades of a dog or cat and not directly on the fleas.

The animals absorb the chemicals through their skin using sebaceous glands. The sebaceous glands are located on the skin of animals and normally release beneficial oil to maintain their fur.

When frontline is applied, the sebaceous gland will also secrete the insecticide across the body and kill any fleas hiding inside pet fur.

What is the Flea Lifecycle? 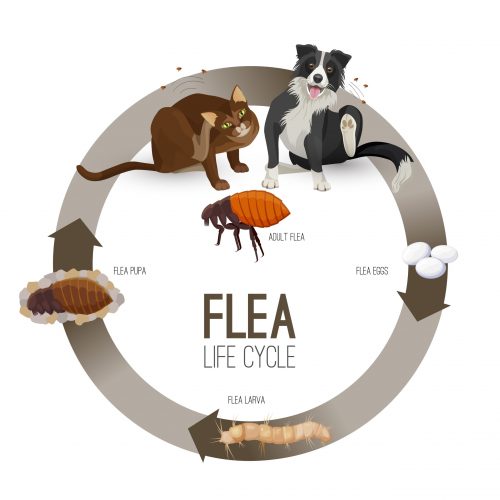 The length of time it takes for fleas to complete a life cycle varies from a couple of weeks to a couple of years, depending on a few factors.

The first is the species. Certain flea species take longer to complete metamorphosis than others.

It is also greatly affected by environmental conditions such as temperature and humidity.

Another big factor that affects flea development is the availability of a host.

If there are no available hosts around, the flea will choose to stay in the cocoon.

That’s because the flea cannot live longer than a few weeks without a blood meal.

But, inside the cocoon, it can survive for longer than a year.

Adult fleas emerge from the cocoon when they sense warmth and increase in CO2 levels. These two are an indication that there is a host close by.

How To Get Rid of Fleas

The first step to eliminating fleas in your home is to find possible locations for flea breeding. Look at the areas where your pets sleep, lounge, and eat.

Next, vacuum and steam clean your carpet to prepare them for treatment. Vacuuming and steaming help remove dried blood, live adult fleas, and flea eggs. It also helps straighten the carpet fibers to help it receive treatment.

In many cases, the steam cleaning will actually kill lots of the fleas that are hiding inside your carpet as well. Since steam can reach temperatures of nearly 200 degrees, this will kill fleas on contact.

For flea treatment, I recommend using insecticide such as Pyrethroids in combination with slower-acting IGRs.

In many cases today you can find a pyrethroid with IGR’s combined into a single insecticide.

You can also use plant-derived insecticide such as orange oil and pyrethrins along with IGRs.

Pyrethroids are of the most widely used classes of insecticides in pest control. They are long-lasting and highly effective.

These are typically insecticide sprays that should be sprayed directly on affected areas such as rugs, furniture, and other locations around the house.

These insecticides can kill on contact and also have a residual effect which can last between one and two months.

IGR’s are like “birth control” for insects. It stops infestations by making adult fleas unable to reproduce. It also blocks immature fleas from becoming an adult.

If juvenile fleas are unable to grow into reproductive adults, their population will eventually die. IGRs have an excellent safety record for people and pets.

Another common method of killing fleas is using dust treatment.

Dust treatments can be used as a lone treatment method as well as in combination with an insecticide spray.

Two of the most common methods are:

Although to pets and humans, DE is just like any other powder, it has microscopic, razor-sharp edges to insects. Diatomaceous earth kills insects by destroying their exoskeletons.

Boric Acid is toxic to fleas when ingested. You can dust it to areas indoors where the fleas are aggregating, such as carpet, cushions, and bedding. Borate salt is safe for humans and pets.

While this treatment is safe for humans and pets, it shouldn’t be ingested or inhaled.

Orange oil has D-Limone, which repels and kills fleas. For the best results, I recommend using orange oil with slower-acting products like IGRs.

When using orange oil, remember to practice caution. At high concentrations, these oils can be dangerous for pets. Always read and follow label directions carefully.