While centi means 100 legs, centipedes can have anywhere from 10 to 300 legs. The exact number of legs will depend on species, age, body size, and body segments.

Many species of centipedes grow more legs as they get older.

In general, larger centipedes have more legs than smaller centipedes. You can expect centipedes to have at least 15 legs, and the most common species have around 40 legs.

Further, the more body segment the centipede has, the more legs it will have.

Why Do Centipedes Have So Many Legs?

Centipedes and millipedes belong to the subphylum of arthropods called ‘Myriapoda.’ Myriapoda is a Greek word that means “countless feet.”

Myriapods have the body structure of a head attached to a segmented body with many legs.

Both centipedes and millipedes use their segmented bodies to move their way into holes, cracks, and crevices.

They wiggle their way into corners to avoid danger and seek shelter.

Because centipedes have segmented bodies, they need many legs to move around.

How many types of centipedes are there?

There are many species of centipedes and millipedes, most of which are not yet discovered.

Likewise, scientists expect there to be around 80,000 species of millipedes in the wild.

Both of these particular genus of animals are known for having many legs. In greek, their subphylum class means “countless feet”.

How Many Legs Do Cryptopid Centipedes Have? 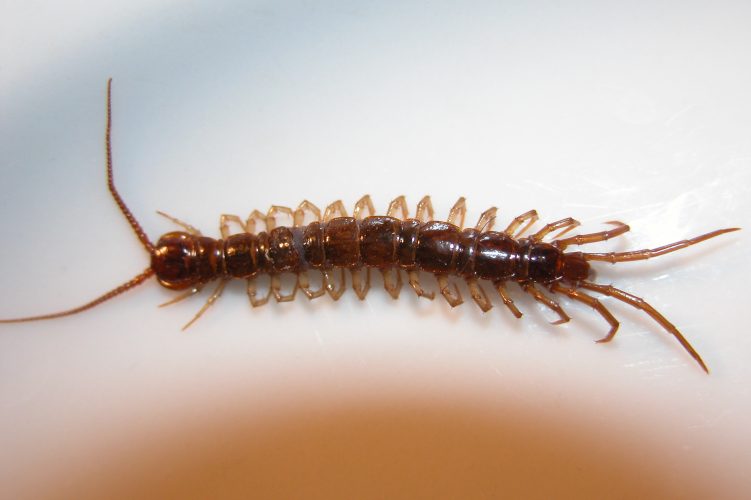 Cryptopid centipedes typically have between 38 and 44 legs. They tend to have one pair of legs per segment. They typically have around 19 to 22 segments.

They can grow to be around 2.5 inches long but can stop growing between 1 and 1.5 inches.

These centipedes are reddish-brown with off-white or tan legs and antennas. The cryptopid centipede is typically found outdoors in moist areas near other arthropods such as pillbugs.

But they can venture indoors if the temperature outside is not ideal. They will commonly hide in humid locations indoors, such as washrooms, attics, basements, restrooms, or locations where there is water damage.

How many legs does a House Centipede have? 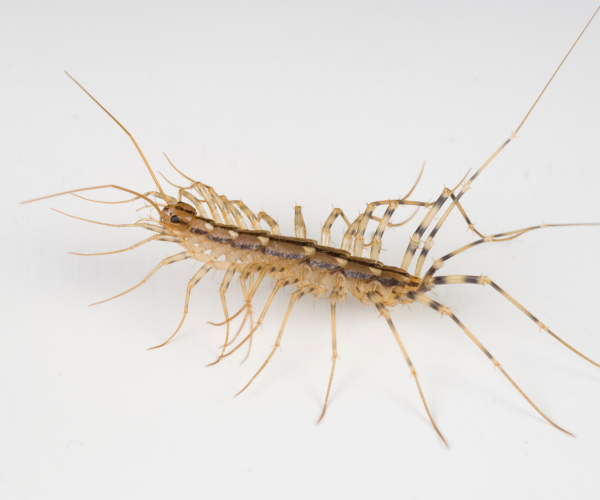 Larva typically hatches with only eight legs. As the house centipede grows and molts, they will grow longer and, as a result, grow more legs.

House centipedes typically measure around 1 to 1 ½ inch long, but they typically appear larger because they have long legs.

Key physical characteristics of the house centipede include: 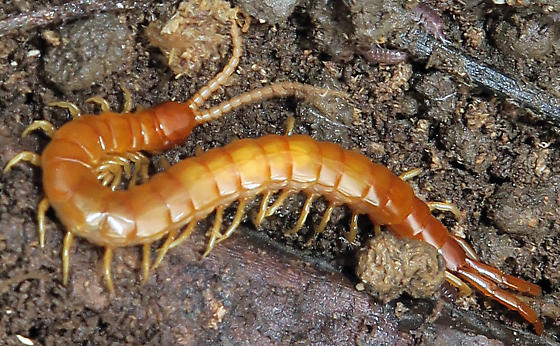 Bark centipedes tend to have around 42 to 46 legs. These centipedes have one pair of legs per segment and grow to have between 21 and 23 segments.

Bark centipedes can range from dark brown to light brown.

They are dangerous compared to other species of centipedes because they are venemous. To humans, their venom is not painful, but it can be painful and also cause skin irritation.

This species of centipede is not aggressive and typically only bites as a defense mechanism. Avoid trying to touch or carry dark centipedes because this will likely cause them to bite you.

They inject their venom using a fang, which they also use to hunt their prey.

These centipedes are commonly found outdoors in moist locations. You are likely to find these outside your home if you live near mountains or forests.

How Many Legs Do Stone Centipedes Have? 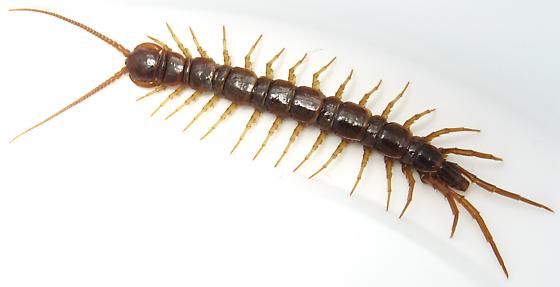 Stone centipedes only have around 30 to 34 legs. They are a smaller species of centipede, only growing to about 1.5 inches.

As their name suggests, these centipedes are commonly found under stones, but they also commonly hide under logs, rocks, and other outdoor items such as pots.

One distinct characteristic is their antennae. Their antennae are around ⅓ the length of their body. They also tend to burrow into the soil and are not found hiding on trees or crawling up objects as much as other centipedes.

How Many Legs Does The Giant Centipede (Scolopendromorpha) have? 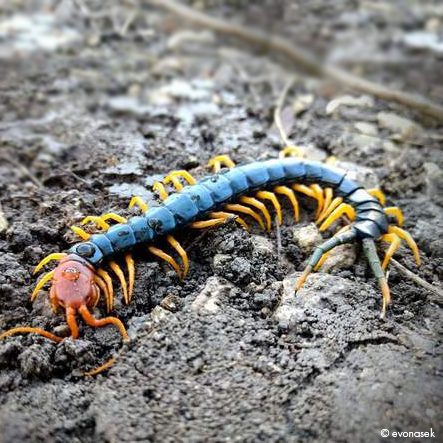 The giant centipede typically has between 50 and 54 legs. They tend to have between 25 and 27 segments and one pair of legs per segment.

Compared to the other centipedes on this list, the giant centipede is highly carnivorous. It also typically the cause of most accidents or bites with humans.

The venom of the giant centipede is not deadly to humans but can cause severe pain and some other skin irritations.

Giant centipedes can grow to be up to 12 inches long. They can vary in color but can have dark green, dark brown, light brown, and yellow hues.

They are quite easy to identify due to their large size and ominous walking speed.

Millipedes and centipedes are often confused because they are both arthropods with many legs.

They can be difficult to differentiate if you don’t know what you’re looking for.

Here are some key differences between millipedes and centipedes.

How many legs do Millipedes have?

Most millipedes have around 300 legs. The exact number of legs will depend on the specific species similar to centipedes.

They also tend to have more legs because millipedes have more segments on their body.

Most millipedes have around 75 segments, but some species can have more than 150 segments.

One of the most common insects confused for millipedes or centipedes is the woodlouse.

The woodlouse also goes by other names such as snowbug, pillbug, or roly-poly. These insects have 14 legs, are segmented, and have a round body similar to millipedes.

They are often thought to be baby centipedes or millipedes, but they aren’t. This confusion often happened because they tend to hide in the same locations as millipedes and centipedes and are often found hiding under logs, rocks, or beneath the soil together.

Woodlouse aren’t related to millipedes or centipedes. They are actually land crustaceans that breathe using gills.

Spiders don’t look similar to traditional centipedes, but they are a common pest that most people experience.

Their eight legs and fast-moving nature can sometimes cause some confusion.

Silverfish are another pest that is often confused with house centipedes.

These insects are relatively the same size, live in the same areas, and have similar colors.

Silverfish have a unique appearance. They have a long elongated teardrop shape.

They have six legs, two long antennae, and three rear bristles at the end of their body. These bristles look similar to spikes, but they are not.

They are covered in light to dark grey scales that look like armor for battle.

Pauropods are very small insects that resemble centipedes. The biggest difference is that they are only 0.5 to 1.5mm long.

They also can be mistaken for smaller species of centipedes due to their similar movement, hiding places, and speed.

To tell them apart you can use their size and color to differentiate them. First, the smallest centipede is approximately 10mm and most are around 1 to 2 inches long.

The second is the color. Pauropods are usually white or tan while centipedes are typically dark or light brown.

Do centipedes have 42 legs?

Forty-two legs are the most common number of legs that a centipede will have.

This is mainly because the most widely distributed centipedes in the United States tend to have around 21 to 23 segments.

With one pair of legs per segment, this would leave centipedes with between 42 and 46 legs.

Do Centipedes have six legs?

No, there are no species of centipede with only six legs. The least amount of legs for an adult centipede is 15. For young centipedes, some can have as little as ten legs but will grow more legs as they molt.

If you see an insect with six legs, it’s more likely a spider, woodlouse, or most other common household insects.

Can centipedes have 100 legs?

No, there is no species of centipede with 100 legs.

The main reason for that it’s physically impossible.

Centipedes can only have an odd number of segments. With each segment having one pair of legs, they can only have 98 legs or 102 legs.