Home » Insect » How To Get Rid of Algae in Pond?

Algae occur in all ponds and are some of the most common nuisance aquatic plants for lake and pond owners.

While algae are essential to a ponds’ ecosystem, algae’s excessive growth can lessen the ponds’ attractiveness.

An overabundance of algae can also have destructive effects on pond life.

So how do you get rid of excessive algae.

In this article, we’ll go over the different ways you can get rid of algae in your pond.

The first step in selecting algae treatment is identification.

Selecting control methods before proper identification can be a waste of time and money due to ineffective treatment.

Algae are primitive, non-flowering plants consisting of hundreds of thousands of species. They have no roots, stems, or real leaves.

While algae found in ponds and lakes are a large group, you can generally break it down into three different categories: planktonic algae, filamentous algae, and macro-algae.

Correctly identifying these categories will increase the overall effectiveness of your treatment. 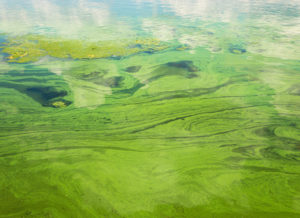 They are what give your pond water a greenish tint.

Planktonic algae are generally beneficial. They shade the bottom of the pond, which helps prevent the growth of rooted aquatic plants.

Finally, planktonic algae provide 80% of the oxygen in the water.

As such, fertilization programs are often used to increase the algae densities and increase a larger fish population.

That said, too many planktonic algae, known as “Blooms,” can deplete oxygen and kill the fish in the pond. 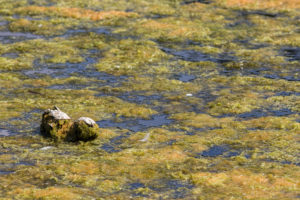 Filamentous algae, known as pond scum or moss, are the most common algae problem for ponds.

They are most likely to interfere with recreational activities like fishing and swimming.

Filamentous algae grow on the bottom sediments in shallow water.

They are made of single cells that form long, hair-like strands resembling wet cotton or wool.

Filamentous algae are heat and UV intolerant. They die off as temperatures rise in mid to late summer.

The gases during decomposition get trapped in the filaments, creating yellowish-green mats that float to the surface.

These mats have a slimy texture and easily fall apart.

Floating mats that appear on the water’s surface is usually the first indication of a filamentous algae problem.

They are rooted in the bottom sediment like rooted pod vegetation and have the appearance of having stems and leaflets, but they have no real root system.

There are two common macro-algae: Chara and Nitella.

It is gritty or crunchy to touch and has a foul, almost garlic-like odor when crushed.

Many species of ducks include Chara in their diet, despite its pungent odor. 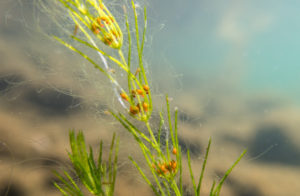 It isn’t easy to distinguish it from several rooted, submerged aquatic plants.

Nitella is soft to the touch and has forked, bushy branches.

You’ll typically find them in higher elevation ponds and lakes with soft water.

Nitella has no known direct food value to wildlife. 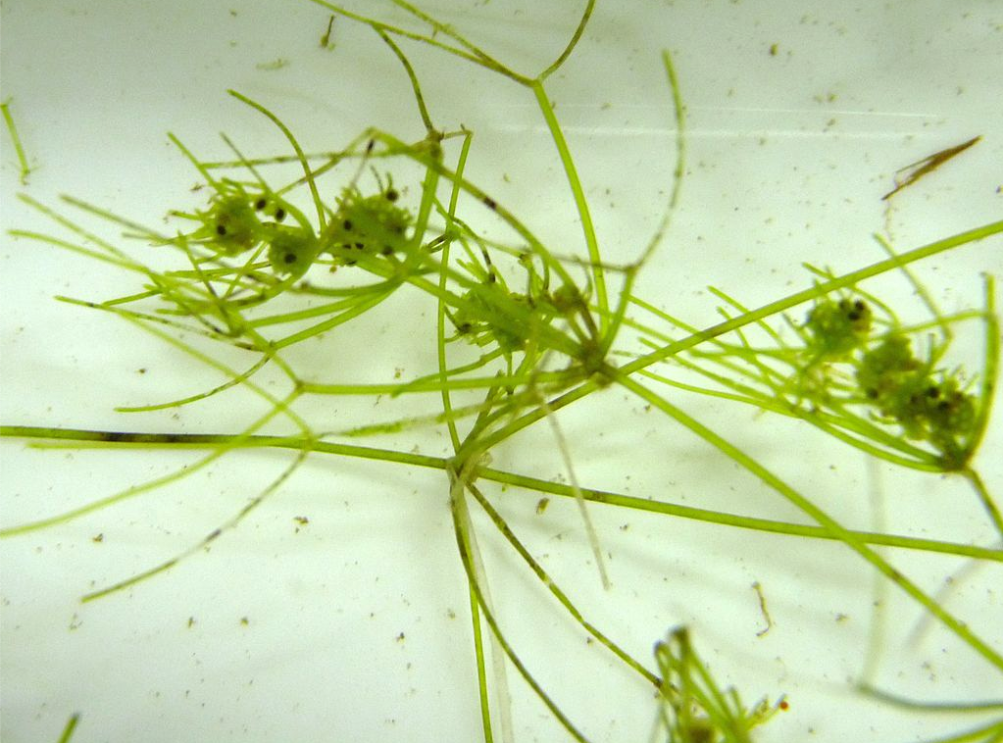 Once you’ve identified the type of lagea, select the appropriate treatment based on:

While planktonic algae are generally beneficial, an overabundance of them can be problematic.

The fast accumulation of planktonic algae in the water is called the algal bloom or algae bloom.

You can determine if your ponds’ bloom densities are beneficial or problematic by measuring water clarity using a Secchi disk.

If your disk showed less than 18 inches of depth, then you will need to fertilize.

In contrast, if your disk indicated depth more massive than 24 inches,  you might need emergency aeration to reduce or prevent further planktonic algae growth.

Aeration can be beneficial to the overall health of your pond, but it should be a part of an integrated management plan and not a solution to algae growth.

Other than replacing the pond water, there is no control method today that can mechanically or physically control planktonic algae.

Replacing your pond water from a source that does not have an algae bloom will reduce the amount of planktonic algae in it.

Unfortunately, water replacement is an impractical option for most pond owners unless.

Unless your pond is tiny and you have access to wells close by, exchanging water in your pond is not a viable option.

Another physical control some consider for planktonic algae is pond dyes.

Pond dyes can work effectively at controlling planktonic algae and cyanobacteria in ponds.

However, you should not use them if you have fish in your pond.

Pond dyes shading out all phytoplankton.

This disrupts the food chain, resulting in reduced food availability for larval and adult fish.

And, while many microscopic animals eat planktonic algae, there are no viable ways to increase these animals’ populations.

There are relatively new bacteria and enzymes available in the market to control algae growth.

However, these bacterias also feed on nutrients in the water, making them impractical control methods.

Chemical control is the only effective treatment option for planktonic algae.

You can do this through herbicides such as copper sulfate, chelated copper complexes, or sodium carbonate peroxy-hydrate.

When applying herbicides, remember to carefully measure the pond area to determine the correct herbicide dosage.

Some states also require you to obtain a state permit before applying the herbicide, so make sure to check.

Also, read the herbicide label carefully and follow the instructions on how to apply it.

The best time to treat planktonic algae is in spring, while plants are actively growing.

Filamentous algae are always going to be present in your pond.

That said, there are ways to control it in ways that it is not noticeable.

One way to control Filamentous algae is through harvesting.

That is, you can remove it through raking or seining.

Because this method doesn’t involve using any chemicals, you do not need to apply for a state permit before implementing it.

That said, this method can be very time consuming and demanding.

Some biological controls can help control algae in a pond.

For Filamentous algae, you can use Mozambique tilapia as a natural treatment.

Mozambique tilapia eats filamentous algae as part of their diet and is a good option for control.

They are best used in conjunction with other treatments, such as algaecide.

Another way to control filamentous algae is by using herbicides such as chelated copper complexes, copper mixed with diquat, or copper sulfate.

If you can see filamentous algae on your pond’s bottom, do not wait until mats appear before managing it.

Start your treatment in the spring before the water temperatures rise.

It’s important not to target filamentous algae once they decay and float on the water’s surface.

These floating mats prevent the herbicide from reaching the living algae on the bottom of the pond.

As such, treating them will lead to wasting money and herbicide.

While macro-algae can be controlled through raking or seining, this method can be complicated because it can re-establish from spores and fragments.

You can also use non-toxic dyes to reduce macro-algae growth.

Unfortunately, these dyes work by limiting sunlight penetration in the ponds.

As such, it shades all living organisms in the pond, disrupting the natural food chain.

Many states require you to get a permit before gaining access to a sterile, triploid grass carp.

You can control macro-algae by using contact herbicides such as chelated copper complexes and copper sulfate.

Copper is the primary control option for all groups of algae.

For copper treatment, you can choose to either apply in copper sulfate or chelated copper.

There are some key differences to keep in mind when choosing one over the other.

Both forms of copper are contact herbicides. That means they need to make direct contact with the algae to kill it.

But, both copper sulfate and chelated copper both sink to the bottom of the pond within a few hours of application.

To prevent chelated copper from sinking to fast, you’ll first need to combine it with other organic compounds to keep the copper. Doing so will keep it suspended and active in the water longer.

Copper sulfate, on the other hand, needs to be dissolved in water before application. Otherwise, the crystals will sink too fast to the pond’s bottom before dissolving, resulting in an ineffective treatment.

You can expect to observe the effects of copper on algae in 3 to 10 days.

But you will not see the full effects of the treatment for up to four to six weeks.

Also, keep in mind that treatment reapplication is typically necessary when managing algae.

Finally, water quality affects the effectiveness and toxicity of copper.

In particular, the alkalinity of the water should be greater than 50 milligrams per liter.

You should never use copper in water with alkalinity less than 20 milligrams per liter.

Treating your pond with copper at alkalinity beyond recommendation can be toxic to aquatic organisms.

Overall, compared to copper sulfate, chelated copper is less toxic to fish and has fewer problems with alkalinity.

The primary reason for algae problems to develop in ponds is the overabundance of phosphorus and nitrogen in the water.

As such, the key to controlling algae in the pond is by limiting both compounds.

Most phosphorus enters a pond through the soil particle in surface runoff and stormwater entering the pond.

So, by reducing erosion and sediment in the soil entering the pond, you can also minimize the nutrients that contribute to excessive algae growth.

The easiest way to minimize nutrients entering a pond is to create a buffer strip of grass and shrubs around the pond.

Buffer strips can capture nutrients before they enter the water. They can also control erosion and eliminate sediment by reducing water movement toward the pond.

A buffer strip of grass that’s only mowed a couple of times each summer can be an effective nutrient and sediment control for the pond.

Phosphorous is also created when you treat and kill algae.

When algae die, it releases all of the nutrients in it, including the phosphorus, back into the water.

To prevent algae from coming back as fast as you kill them, you can address this issue in several ways.

The first is to apply a phosphorus binder about five days after copper-based algaecide treatment.

The binder will lock the phosphorus in an unavailable state, so the algae can’t use it to begin vegetation.

You can also apply a product that contains natural bacteria.

The bacteria will eat the organic material in the pond that filamentous algae use as a nutrient source.

You can also use a water column clarifier immediately after the copper herbicide treatment.