Home » Insect » How To Get Rid of Japanese Beetles

Japanee beetles seem harmless but the reality is they’re not. These beetles are dangerous because they infest in large numbers and they have a voracious appetite.

If they are not treated properly, they can cause serious damage to trees, shrubs, and flowers around your home.

Don’t worry. In this post, I am going to tell you how to identify Japanese beetles and get rid of them.

Japanese beetles look different depending on their stage in their life cycle. Making sure that you know what each life cycle looks like will help you identify Japanese Beetles. 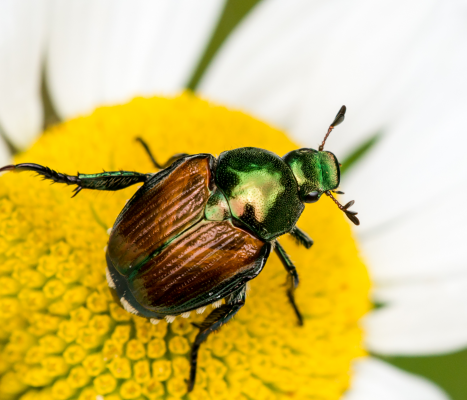 Adult Japanese beetles grow to be between ⅓ and ½ inches. Their signature look includes a metallic green thorax and body.

The body is typically not seen due to its wings. The wings of the Japanese beetles are bronze and also appear metallic.

Both the thorax and wings have a shiny metallic appearance making them sparkle in direct sunlight.

Other key characteristics are six small clusters of white hairs that occur on the side towards the bottom half of the abdomen. 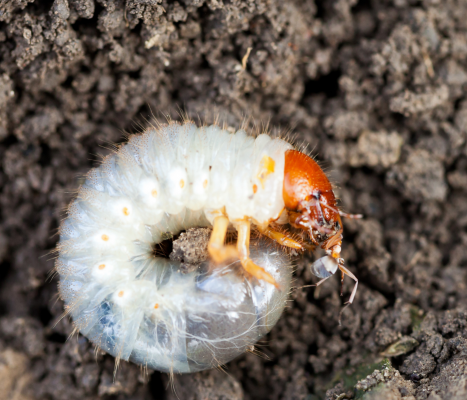 The Japanese beetle larvae are often referred to as grubs. They are “C” shaped, with a white body, brown head, and a dark grey hind end.

They are typically ½ inch but can grow up to 1 inch when fully mature. A key characteristic that is used to distinguish Japanese beetle larvae from other grubs is the hairs on their hind end.

These hairs make a “V” shape while other species of grubs have different patterns on their bottom.

For example, May/June beetles typically have a pattern of hair down the center of their hind end, with other outside hairs pointing outwards.

The pupa can vary in color depending on their age. They begin a cream color and, as they mature, begin to develop into mahogany or brownish-red color.

Japanese beetle eggs are small, oval, and creamy white. These eggs start at around 1/16 inch. But as they develop and get closer to hatching, they grow larger to around ¼ inch.

Eggs are found in small clusters buried underground. You might encounter these if you are gardening or moving around the soil in your yard.

No, Japanese beetles are not dangerous to humans, but they can be dangerous to the appearance of your garden and flowers.

Japanese beetles will feed on and destroy your flowers, trees, and fruit. They use their large mandibles to chew on food.

While their mandibles are large, they are too weak to cause any damage to humans.

Japanese beetles follow a four-stage life cycle. Through this process, they go through a complete metamorphosis.

During July or August, adult Japanese beetles lay their eggs in the soil. These small, white, oval sacs will eventually hatch after one month.

The grubs that emerge from the eggs will begin eating on the roots inside the soil to survive. The Japanese beetles will remain in the grub stage for around ten months.

They will remain in the soil as larvae throughout winter until spring or early summer.

During spring, typically between May and June, grubs will hide just beneath the surface of the soil where they go into the pupa stage.

They will remain in the pupa stage for 2 weeks before penetrating the soil and beginning to fly.

After they leave the soil, they will spend between May and July (3 months) mating and damaging gardens preparing for the next seasons.

After they mate and feed, and as winter approaches, the adult Japanese Beetles will begin to die off.

Most of the signs of Japanese beetles are superficial to gardens and flowers.

If you encounter some of the signs below, then you likely have Japanese Beetles.

During Fall and Winter: 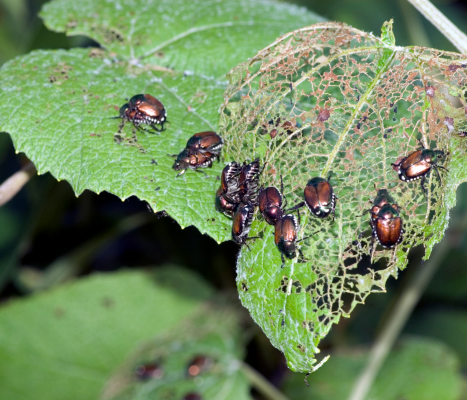 Japanese beetles have a voracious appetite. They will consume almost any vegetation, including leaves, trees, shrubs, fruit, vegetables, crops, grass, and turf.

They are versatile beetles that actively consume over 300 species of plants. This makes most flowers and plants susceptible to Japanese Beetles.

The damage caused to full-grown plants by adult Japanese beetles is mainly superficial but includes damage to the leaves and steps. You will typically find leaves with many small holes or stems with a damaged base.

Mature flowers, plants, and shrubs can typically survive Japanese beetle infestations. But, if they are still maturing, severed damage can reduce their growth, destroy their blossoming season, and in some cases cause them to die.

Japanese beetle larvae do most of their damage underground. The larva will feed on roots, grass, or turf to survive.

The damage to the roots hinders your vegetation’s ability to absorb sufficient water and nutrients to remain healthy.

This can cause patches of dead grass to appear around your yard. This grass can typically be rolled or pulled directly out of the soil due to a lack of roots.

But, Japanese beetles will also approach your home if you have plenty of vegetation that they can feed on.

In particular, Japanese beetles will gravitate towards soft, moist soil during mating season to lay their eggs.

Gardens or yards with decaying, dying, or diseased plants, flowers, or shrubs are also a prime target.

The dying vegetation makes it an easy target for Japanese beetles to feed on.

How To Get Rid of Japanese Beetles

1. Use Row Covers or Garden Covers

Row covers or garden covers are either thin netting or wire mess netting that you can place over your smaller trees, shrubs, and flowers.

This will help you get rid of adult Japanese beetles, as long as they don’t get trapped inside when you place the cover over.

It’s important that the cover you use is fine enough to prevent Japanese beetles from entering.

This method is effective because if you eliminate their food source, they will seek other areas searching for food.

The issue with this method is that it does not prevent or get rid of Japanese beetle grubs.

If these grubs are in the soil, once they become full adults, they will be trapped inside your cover with a buffet of potential food options,

While this can be dangerous, if you remove any newly pupated Japanese beetles with a set of pinchers or a vacuum, this can be a great way to reduce the population quickly effectively.

Japanese beetle traps are traps that use chemical lures, typically aromatic food, and a sex pheromone to attract the beetles.

The trap uses a one-way entry point to prevent any beetles from exiting once they’ve entered.

These traps are effective because, often, Japanese beetles will swarm items of food. Once several beetles begin consuming a piece of food, the beetle’s pheromones, along with the smell of the food, will begin attracting more beetles.

Mass beetle traps use this tendency to your advantage.

There is a lot of skepticism around Japanese bottle traps. Most claim that the traps attract more Japanese beetles to your home without preventing them from damaging your trees, gardens, or flowers.

While this can be true if you don’t place your traps, strategic placement of your traps can help reduce the population and prevent the amount of damage to your property.

First, they found that these traps effectively caught large numbers and reduced the amount of damage to surrounding vegetation.

There are several key takeaways from the research to ensure the effective use of the traps.

You have two options when using Japanese beetle traps: DIY or store-bought.

To create a Japanese beetle trap all you need is

You can follow this guide for detailed steps on how to create your own Japanese Beetle trap.

I recommend DIY because there are not many store-bought mass traps on the market. Mass traps allow you to target a large number of beetles with a single trap.

DIY traps using 30-gallon plastic containers will allow you to capture countless beetles without having to replace them.

DIY taps typically cost between $25 and $40, depending on how large the container. The great thing is that these traps are reusable. This means every season; you can dispose of the captured beetles and store the traps for next year.

Many store-bought traps are disposable and require you to purchase new traps each year.

Beneficial nematodes are a method of biological control. Nematodes are a species of roundworms that are typically naturally occurring inside the soil.

Nematodes will not affect adult nematodes if they already pupated and exited the soil.

But they will attack larva, eggs, and pupating Japanese Beetles. These roundworms will effectively kill all Japanese beetle inside the soil.

To apply nematodes, you need to apply them directly to the soil.

Combine the entire pack with one gallon of water.

Let it sit for 10-15 minutes before pouring it into a spray bottle.

Spray the mixture on infested wood or directly on the soil around your home. You can also spray it directly on mud tubes.

For the most effective application, nematodes should be sprayed In April or early May.

This will ensure that you treat the Japanese beetles before they’ve begun pupating and flying around.

Applying later than May means you could miss many Japanese beetles that have already pupated into adults.

Milky spores are a type of spore that contains bacteria that will kill Japanese beetle grubs.

Similar to nematodes, milky spores need to be applied to the soil where you suspect Japanese beetle grubs.

For the most effective application, milky spores should be applied between February and early May.

This will ensure that the spores can attack the grubs before they pupate or begin pupating.

One teaspoon of milky spores needs to be applied to every 4 feet. Repeat this application in rows on the desired soil and grass every 4 feet.

After applying the milky spores, you should lightly water the area to help the spores penetrate into the soil, and they can begin attacking grubs under the soil.

Parasitic wasps are another natural predator of Japanese beetle grubs.

The Spring Tiphia is the specific species of wasp that feed on Japanese beetle grubs.

These wasps will help reduce the size of the infestation and reduce the potential amount of damage.

If the parasitic wasp is not present around your home naturally, you will need to introduce it naturally.

Unroduntlly, depending on where you are located, finding spring tiphia can be difficult to find.

If the adult Japanese beetles are already flying and swarming around your yard, using a spray is an effective method to get rid of them.

The most effective sprays that are also safe for plants include pyrethrin-based insecticides or a spray with neem or orange oil.

These sprays will kill Japanese beetles on contact but don’t have any residual effect.

How To Prevent Japanese Beetles

A great way to prevent Japanese beetles is to keep your yard well maintained.

It’s important that you dispose of any decaying or rotting branches, fruit, or other objects in your yard.

Its also important to maintain or throw away any dying or dead plants, shrubs, or trees around your home.

3. Use Nematodes or Milky Spores

Nematodes and milky spores are great ways to prevent Japanese beetles. These are great because you can apply them at any time before they pupate and come out of the soil.

The nematodes and milky spores will attack any grubs inside the soil and kill them.

This will eliminate the infestation before it can even begin.