What Do Male Mosquitoes Eat?

Unlike their female counterparts male mosquitoes do not eat blood. They feed solely on nectar.

As a result, male mosquitoes around the world pollinate the flowers they visit.

Pollination is one of the most commonly overlooked ecological functions of mosquitoes.

Some mosquito species pollinate specific types of flowers, while others pollinate any flower they visit.

What Do Female Mosquitoes Eat?

Both male and female adult mosquitoes feed on the nectar of plants for nourishment.

But, female mosquitoes need to have a blood meal before they can reproduce.

They need protein from blood to create and lay eggs.

In some mosquito species, the female will not produce eggs until after it has had a blood meal.

Other mosquito species, however, only necessitate a blood meal to lay their eggs.

Other than protein, blood also provides female mosquitoes sugar and lipids for nourishment.

The blood can come from humans and animals alike.

Femal mosquitoes can feed on warm-blooded animals such as birds, ducks, cats, dogs, and raccoons.

However, some prefer to get their blood meal on cold-blooded animals such as snakes, frogs, and lizards.

Some species of mosquitoes also prefer birds to other mammals.

Female mosquitoes find their blood-meal by detecting increased levels of C02 we produce when we exhale.

They can also detect us though chemicals our bodies omit when we sweat such as lactic acid, uric acid, and ammonia.

Once she lands on her potential victim, she looks for the perfect spot to inject her saliva.

The saliva contains an anticoagulant that thins the blood and makes it easier for her to feed.

Mosquito saliva also numbs the skin so the victim would not notice being bitten.

Unfortunately, although their saliva makes their bites painless at first, it is through it that mosquitoes spread diseases.

Once a female has had her blood meal, she flies to a shaded area such as tall grass or tree until she’s ready to lay her eggs, usually between three to five days. 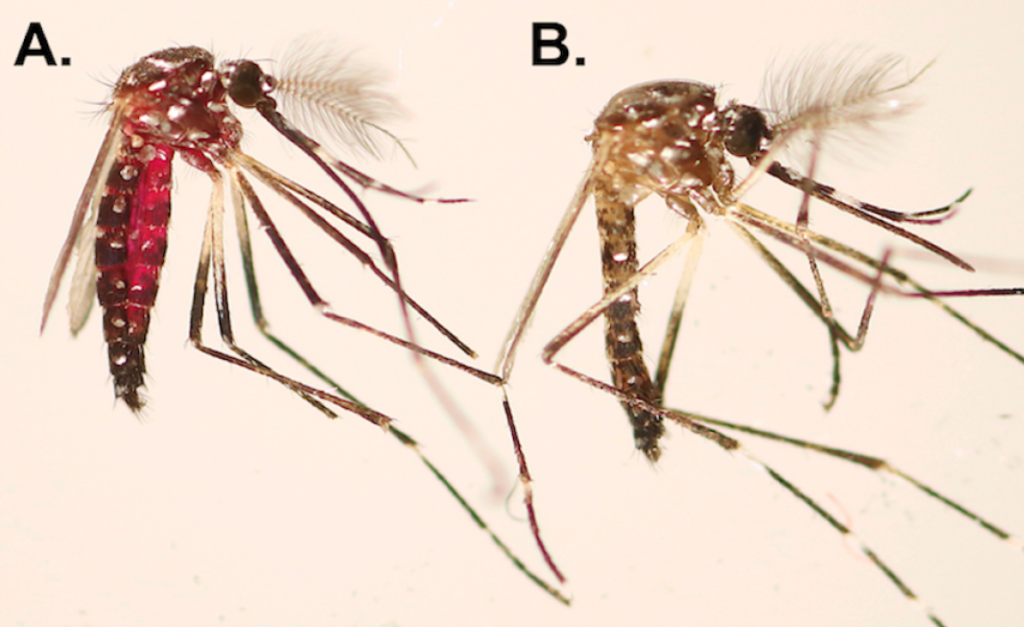 Male mosquitoes are slightly smaller than female mosquitoes. They have palps longer than or as long as probiscis.

In other words, it helps mosquitoes mate and procreate.

The males’ bushy antennae are sensitive to sound waves. In particular, it is sensitive to the frequency produced by female mosquitoes’ wingbeat.

When a female mosquito is within a few centimeters from the make mosquito, the male can easily hear good vibrations.

Female mosquitoes are slightly larger than their male counterparts.

Long probosis allows female mosquitoes to pierce on skin and suck on the blood of their host.

The proboscis have two tubes.The first tube allows female mosquitoes to inject anti-coagulant to thin the blood and make it easier for her to feed.

It also releases a mild painkiller that numbs the skin so the victim would not notice being bitten.

It’s through this saliva that mosquitoes spread diseases.

The second tube in a female mosquitoes probosis allows them to draw blood from their host, whether that be humans or animals.

How Long Do Male Mosquitoes Live?

Males male mosquitoes only live for four days to two weeks, which are significant less than their female counterparts.

They die soon after they’ve fulfilled their role in the reproductive cycle: mating with the female mosquito.

How Long Do Female Mosquitoes Live?

Whereas male mosquitoes only live up to two weeks, a female mosquito’s average lifespan can last anywhere between two to four weeks.

While female mosquitoes’ lifespans vary depending on species, most live for about a month.

This prolonged life allows them to lay their eggs and repopulate.

Female mosquitoes generally lay 100 eggs at a time, but they can lay eggs up to 300.

The eggs will eventually hatch into larvae, which live and develop in water.

The larva will go through a few molts before it develops into a pupa. This process can take anywhere between a few days to a few weeks.

The pupal stage lasts anywhere from one to a few days, depending on the water temperature.

While inside the pupa, the mosquito develops wings and turns into an adult.

Mosquitoes’ total life cycle takes anywhere between four days to a month, depending on the conditions.

What do Male Mosquitoes Do?

Because male mosquitoes do not feed on blood, you’ll rarely see them bugging humans.

This is the reason why most people think only female mosquitoes create a buzzing noise with their wings.

The truth is, both male and female mosquitoes create a buzzing sound. However, male mosquitoes are almost never near us because they are not interested in us.

Instead, male mosquitoes spend their lives focusing on two things: eating sugar from nectar and mating.

What do Femals Mosquitoes Do?

While they also find nourishment in nectars, they must feed on blood in order to reproduce.

Some species of mosquitoes require the female to have a blood meal to create eggs. Others require them to feed on blood before they can lay eggs.

Other than feeding on nectar and blood, female mosquitoes must also mate and reproduce.

To lay their eggs, female mosquitoes must find an area with at least 1 tsp of non-moving water.

Because female mosquitoes are the only one that bites humans and animals, they are the ones responsible for diseases transmitted by mosquitoes.

Mosquitoes can grow anywhere between 2.5 to 10mm long. But male Mosquitoes are generally smaller than female mosquitoes.

Where Do Male Mosquitoes Live?

They like hiding in the shade such as tall grass and near trees.

Where Do Female Mosquitoes Live?

While female mosquitoes eat blood, they also eat nectar like their male counterparts.

The eggs will eventually turn into a large and pupa, both of which are aquatic.

The water needs to be non moving because baby mosquitoes need to breathe air through the surface of the water. They are very susceptible to wave action.

As such, you won’t find mosquitoes in open bodies of water like lakes or ponds.

Mosquitoes are common in:

Mosquitoes prefer to live in shady areas but can also develop in sunny locations.

Yes and no. Male mosquitoes are not harmful in that they do not bite humans and animals. They live happily eating nectars and do not carry any diseases.

That said, male mosquitoes are harmful in that they play an important role in maintaining and growing mosquito populations.

Yes. When female mosquitoes blood, they leave their saliva behind. These saliva can transmit pathogens such as malaria, Yellow fever, encephalitis, Zica, Dengue, West Nile virus and Chikungunya.

As a result, female mosquitoes are the deadliest animal in the world. Their bites take more than 1 million human lives every year, most of which are due to malaria.

How To Stop Mosquitoes From Biting You?

One of the most common ways to prevent mosquitoes from biting you is by applying chemical repellents that contain DEET, picaridin, or PMD.

DEET was initially created in 1946 to keep US Army troops safe from mosquito-borne illnesses.

Since it’s inception, it’s been one of the most reliable mosquito repellants in the world.

Today, the World Health Organization (WHO) recommends DEET as one of the best repellents against mosquitoes.

That said, DEET does have its drawbacks.

Although rare, some people may experience skin irritation with DEET, especially in high concentrations.

Some also find the smell and feel of DEET to be unpleasant. For some users, DEET may feel too greasy on the skin.

Also, while DEET is safe to use on skin, it is known to damage some plastics and certain synthetic materials, such as rayon, spandex, and vinyl.

If you are planning to wear DEET, keep it away from your sunglasses and any clothes made of rayon, spandex, and vinyl.

In case it gets on these materials, make sure to wash them immediately to avoid damage.

Picaridin is another popular mosquito repellent used on human skin or clothing.

It can come in the form of liquids, sprays, aerosols, or wipes.

Picaridin was first made in the 1980s, but it was only available in the United States in 2005.

Although it doesn’t have the long-standing record of DEET, Picaridin has been proven to be just as effective at repelling mosquitoes.

It also has several distinct advantages over DEET.

For one, picaridin doesn’t have the greasy that consumers complain about with DEET.

It is also odorless and doesn’t damage plastics or other synthetic materials.

PMD is a natural oil extracted from the eucalyptus plant.

It’s a great natural alternative to DEET and Picaridin as a mosquito repellant.

Mosquitoes are attracted to black, deep blue, and red. To keep yourself from being a target, stick to light colors.

Mosquitoes target exposed skin. To keep them away, cover as much of your skin as possible.

You’ll also want to wear thicker fabrics when you can.

Looser clothing is also better than one that fits tightly on your body.