Home » Bed Bugs » Stink Bugs vs Bed Bugs: How To Tell The Difference

Bed bugs are one of the pests that everyone wants to avoid. Unfortunately, a few pests look very similar to bed bugs that can cause unnecessary concern.

One of those insects is the stink bug. Stink bugs are not as difficult to get rid of as bed bugs and more of a nuisance pest than anything else.

In this post, I will go over everything you need to know to tell the difference between bed bugs and stink bugs and what you can do to eliminate each one.

What Are Stink Bugs?

There are several different species of stink bugs. The most common and invasive species is the brown marmorated stink bug.

This species of animals get their name from their tendency to release an odor when frightened or killed.

Stink bugs are found across the U.S, but they pose the greatest threat to farms and gardens, where they cause most of their damage.

Inside homes, they can be found in warm locations near sources of food.

What Are Bed Bugs?

Bed bugs are parasitic insects that require human blood to survive and reproduce. These bugs tend to hide and live near their hosts.

This is how they get their name. As a result, they are commonly found inside bedrooms, but they will hide anywhere their host’s sleep.

Bed bugs use host tracking tendencies such as CO2, heat, and moisture. They use these signals to find their host and feed.

They tend to feed on their host for between 3 – 5 minutes before retreating into a crack or crevice. 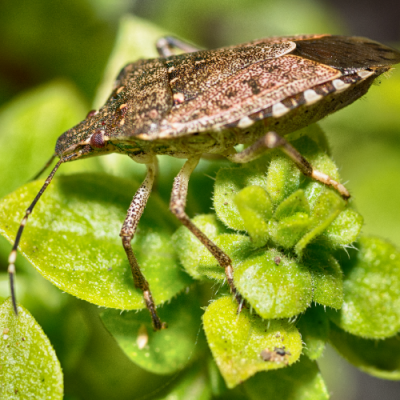 Stink bugs are large, oval-shaped insects that measure between ⅝ of an inch or 17mm.

They have a dark brown or greyish color.

Stink bugs are easy to identify for their unique pattern or markings on their back. They also have their signature white stripes on the edge of their abdomen.

These insects have long antennas and strong dominant back legs. 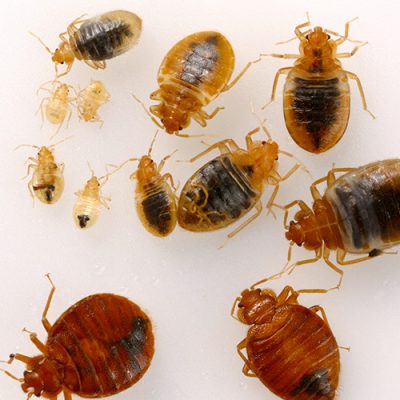 Bed bugs are small oval or rectangular-shaped insects. These insects are the size of short-grain rice. They measure approximately 3/16 of an inch or 4-5 mm.

They are typically light brown before they eat, and they turn a darker brown after they eat.

What Do Stink Bugs Eat?

Stink bugs are mainly agricultural pests that feed on crops, leaves, and flowers. Unlike bedbugs, they don’t pose any biting threat to humans.

Although they are primarily agricultural pests, they can live in urban areas. They can survive on a wide variety of vegetation, including weeds, grass, and plant leaves.

As a result, they can live anywhere they can find consistent vegetation.

While not as common, stink bugs also eat fruit and, in some cases, other insects such as caterpillars and beetles.

What Do Bed Bugs Eat?

Bed bugs only consume blood. While bed bugs may drink other mammals’ blood, such as dogs, cats, or birds, this is not a common occurrence.

Although adult bed bugs can survive off any mammal’s blood, they need human blood to reproduce.

Where Do Stink Bugs Live?

Stink bugs tend to live in vegetation such as farms and gardens during the spring. In winter or as temperatures begin to cool, they will migrate into structures.

Their migration indoors is a sign that they are preparing to overwinter and looking for a permanent place to hide for the winter season.

Where Do Bed Bugs Live?

Bed bugs live inside structures that humans inhabit. They are commonly found in bedrooms, but they will live anywhere their human host sleeps or stays for extended periods.

This means that you can find bed bugs living inside living rooms, cars, and even dining rooms.

Stink bugs don’t bite. They don’t pose any threat to humans or pets. They also are not known to spread any diseases.

If there are stink bugs inside or outside your home, there is no need to worry. These bugs are harmless. 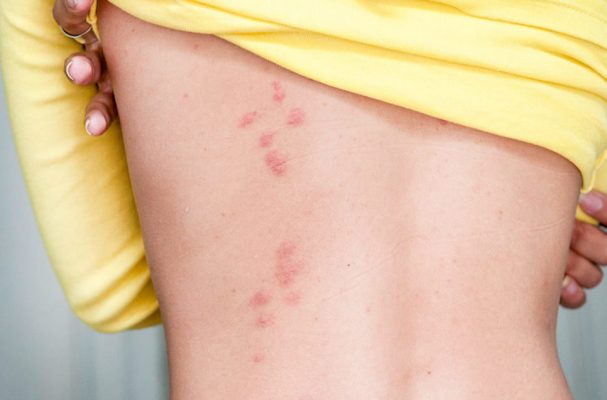 These bugs release an anesthetic and anticoagulant that make the biting process as painless and quick as possible.

Common places that bed bugs include:

Bed bugs tend to bite in clusters leaving multiple bites in close proximity. After biting, bed bugs will return to their hiding spot for several days before returning to bite.

Stink bugs are harmless insects. They don’t bite or spread any diseases.

Bed bugs are not dangerous, but they can be a huge nuisance to people. The biggest concern that bed bugs cause is their disruption.

Their multiple itchy bites can disrupt your sleep, and excessive itching can cause skin infections.

People dealing with an infestation may also suffer from anxiety and lack of sleep.

Although rare, ned bug bites can cause allergic reactions that may need medical attention.

Finally, their bites can transmit parasites, although it’s not common.

Stink bugs lay eggs in clusters of 20-30 eggs at one single time. After hatching, stink bugs go through 5 molting stages of development before they reach a full-grown adult. 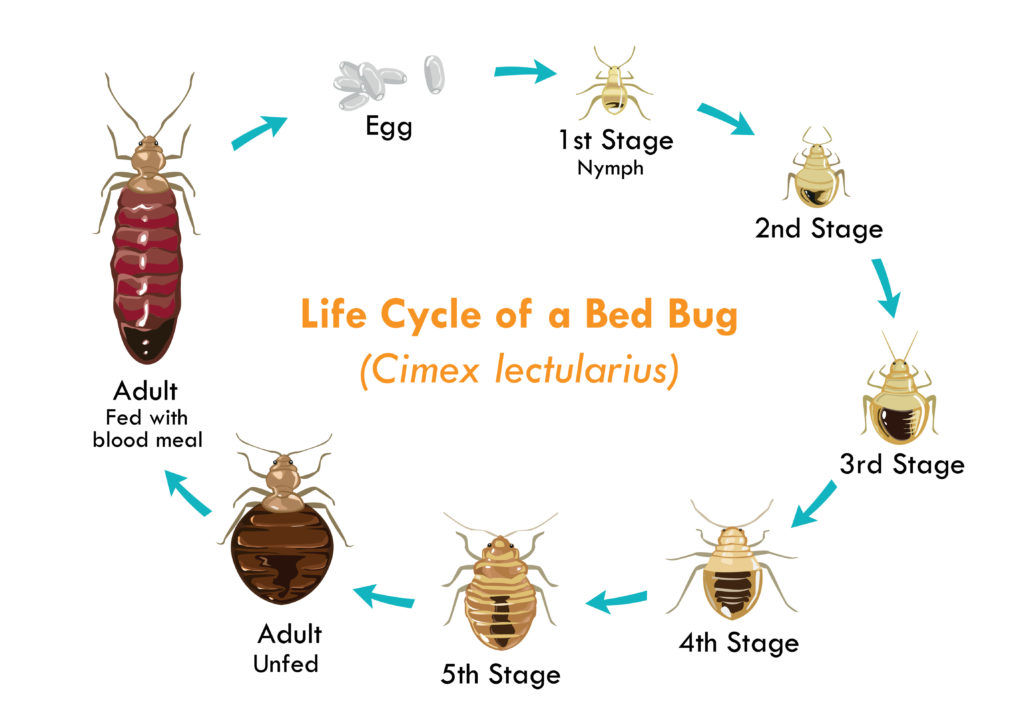 The first stage is the egg, followed by five different nymph stages and the adult stage.

Nymphs must eat at least once to reach the next phase of development.

The main reason for stink bugs is seasonal changes. During spring and summer, stink bugs will come out of their hibernation area to begin mating.

Stink bugs are likely to be attracted to your home if there is a garden or farm nearby. Stink bunks are found of vegetables, fruits, flowers, and weeds.

If you find stink bugs indoors, this is due to the changing seasons. As temperatures begin to cool, stink bugs will look for a warm place to hide while they hibernate.

If they are inside your home, this is likely because three are easy entry points around that are allowing them indoors.

Bed bugs are commonly transferred from one infestation to another. If you have bed bugs, they likely hitchhiked into your home.

These bugs will remain anywhere there is a human host that they can feed on. They are hard to get rid of because of their ability to survive for long periods without food.

They can remain hidden without food for 12 – 14 months.

There are some reports of bed bugs walking across power lines and outdoor walls, but this is rare.

How To Get Rid of Stink Bugs?

Stink bugs are harmless if they remain outside and you don’t have a garden.

You can seal cracks and crevices easily using caulk. If you have larger entry points, you can use mesh to fill the hole and prevent stink bugs from entering.

Another common entry point that gets overlooked is small gaps around doors and windows. To seal these entry points, you need to weatherstrip your home.

This can be done by using door sweeps and applying a seal to your door and window frames.

Ripped or broken screens are an easy way for stink bugs to enter your home since stink bugs are attracted to light which makes it common to find them on screens.

It’s important that you inspect all the screens around your home and ensure that they don’t have any rips or damage that could let stink bugs into your home.

Stink bugs are attracted to light. One way you can eliminate stink bugs is that you can turn off lights around your home.

You can also keep your lights off or use black-out curtains to get rid of stink bugs.

If you are trying to get rid of stink bugs outside of your home or garden, insecticides are the best option.

The best way to get rid of stink bugs is to use granules and liquid insecticides.

You can apply granules to your yard and use water to activate the insecticide and help it drench into the soil.

You can use liquid insecticide and apply it to your home’s surface and around common entry points.

How To Get Rid of Bed Bugs?

There are several things you can do to eliminate bed bugs, including:

The right method for you will depend on the severity of your infestation and your budget.

The following treatments are less expensive but more time-consuming:

Keep in mind, these methods are only effective with careful application. It also typically takes longer to see results.

A more expensive option is to hire professional assistance. The methods professionals use include:

These treatments are either full home treatment or localized to sections of your home, depending on your needs.

While more costly, professional treatments are generally much faster and tend to produce results the same day or within several days.