Home » Product Reviews » Termite Queen: Everything You Need to Know

Termite queens are one of the most fascinating insect species on the planet.

They have enormous abdomens which can lay one egg every 15 seconds.

Unfortunately, these egg-machine is also the reason why termites are one of the most difficult pests to exterminate.

In this article, we’ll go over everything you need to know termite queens.

Let’s start from the beginning: what is a termite queen?

What is a termite queen?

A termite queen is responsible for producing eggs and sustaining the colony’s survival and growth.

Queen termites suppress the development of other future kings and queens, known as reproductives, with pheromones.

She regulates egg production to make sure that the colony allocates its resources optimally.

Eggs and baby termites need tending and nourishment by the workers.

So, the queen must make sure that the colony will only produce eggs in proportion to the colony’s ability to care for them.

Once the colony matures, the queen may allow some of the reproductives to develop into supplemental or secondary queens.

Secondary queens help the primary queen produce enough eggs for the colony to continue to grow. 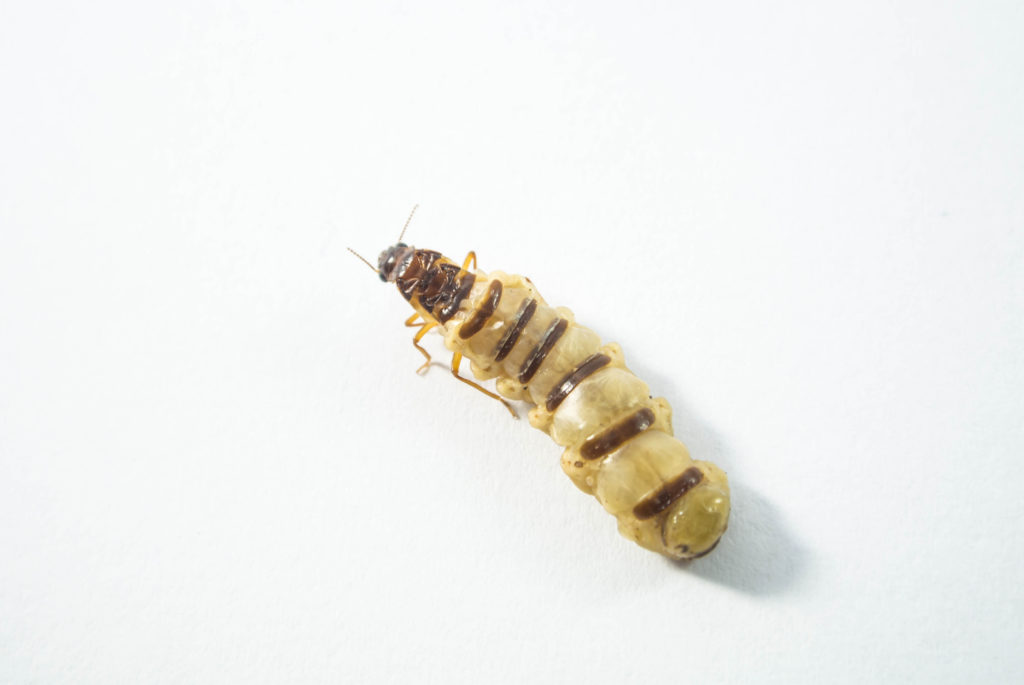 The termite queen has a tiny head attached to a large abdomen that measures up to four inches.

Her abdomen has a yellowish color that’s translucent enough for you to see the pulsating liquid inside.

When does a termite become the queen?

Termites become queens when the primary queen dies or if she allows them to become one.

Queen termites suppress the development of other future kings and queens, known as reproductives, with pheromones.

From time to time, the queen will allow hundreds of reproductives to leave the nest and establish a new colony.

The female reproductive will go on to become the queen of a new colony.

Reproductives are the only type of termite that has wings.

They use their wings to leave their nest, find a mate, and settle down to a suitable home.

Secondary queens help the primary queen produce enough eggs for the colony to continue to grow.

When the primary queen termite dies, the pheromones that prevent other reproductives from becoming queen cease to exist.

This allows secondary queens to take her place.

No. Termite queens are immobilized by the massive egg-chambers attached to their heads.

They are fed, cleaned, and nourished by the workers.

When the queen lays her eggs, the workers take them away to tend to them.

Once the eggs hatch, the baby termites grow to assume a role in one of the termites’ caste: workers, soldiers, and reproductives.

Eventually, some of her offsprings will become queens themselves.

Termite queens can live between 50 years.

But the average age of termite queens is between 15-25 years.

Their peak egg production years last for up to ten years.

That said, termite queens’ lifespan depends on their location.

Termites that grow as old as 50 years are the ones who live in the wild.

Household termites, on the other hand, generally die much younger because they tend to get spotted by property owners.

How many eggs does a termite queen lay?

Since, on average, termite queens live up to 25 years, they’ll generally produce about between 165 million and 220 Million eggs in their lifetime.

When a queen is just starting a colony, she doesn’t lay as many eggs.

It’s only when the colony matures, and there are enough workers to tend to the eggs will the queen lay tens of thousands of eggs in one day.

Where does the termite queen live?

The termite queen lives deep inside the nest with the termite king.

She resides in a special chamber known as the royal chamber that the workers tend to according to her needs.

The workers renovate this chamber as the queen grows in size.

Secondary queens do not live in the main nest where the primary queen lives. Instead, they are in a separate nest that’s connected to the main nest.

Termite queens eat wood that’s been digested and cultivated by the worker termite.

She cannot chew or digest the wood herself and relies on the worker termites to feed her.

Where does the termite queen lay her eggs?

The termite queen lay her eggs in a special chamber known as the royal chamber.

Royal chambers are at the heart of termite fortresses.

When the queen lays her eggs, the workers take them to an incubation chamber where they will care for them.

What is A Termite King?

A termite king is responsible for mating with the queen and releasing caste-controlling pheromones.

He lives in the royal chamber next to the queen.

During the first couple of years, king termites are also responsible for building the chamber and helping care for the young.

They help to maintain their nests until the queen produces enough workers to do it.

Once the colony has enough workers, the king’s responsibility solely becomes mating with the queen.

The king will continue to mate with the queen throughout his life to grow the colony.

Other than mating with the queen, the kings’ role is not fully understood. There isn’t as much study around them as their female counterpart. 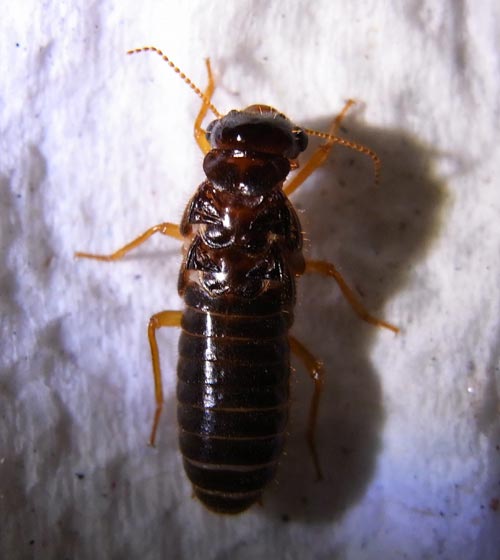 Compared to the termite queen, however, the king is significantly smaller.

How to find a termite queen?

The termite queen is located in the heart of the termite nest, so finding her can be tricky.

The household termites’ nests are also usually located deep in the wood or underground, making them difficult to access.

But you are more likely to be successful at finding a termite queen that’s located underground or in a mound than one that’s inside the wood.

If the nest is underground, you’ll have to dig deep.

The termite queens are placed in a special chamber that looks like a bee nest deep in termites’ fortress.

To get to this chamber, you’ll have to go through layers of dirt first.

Once you’ve discovered the chamber, you’ll have to slice it open to get to the queen.

If the termites are on a tree or stump, you’ll need to cut down the center of the wood.

But, you need to work fast because the moment the termites’ sense danger, they’ll move their queen.

What is The Termite Caste System? 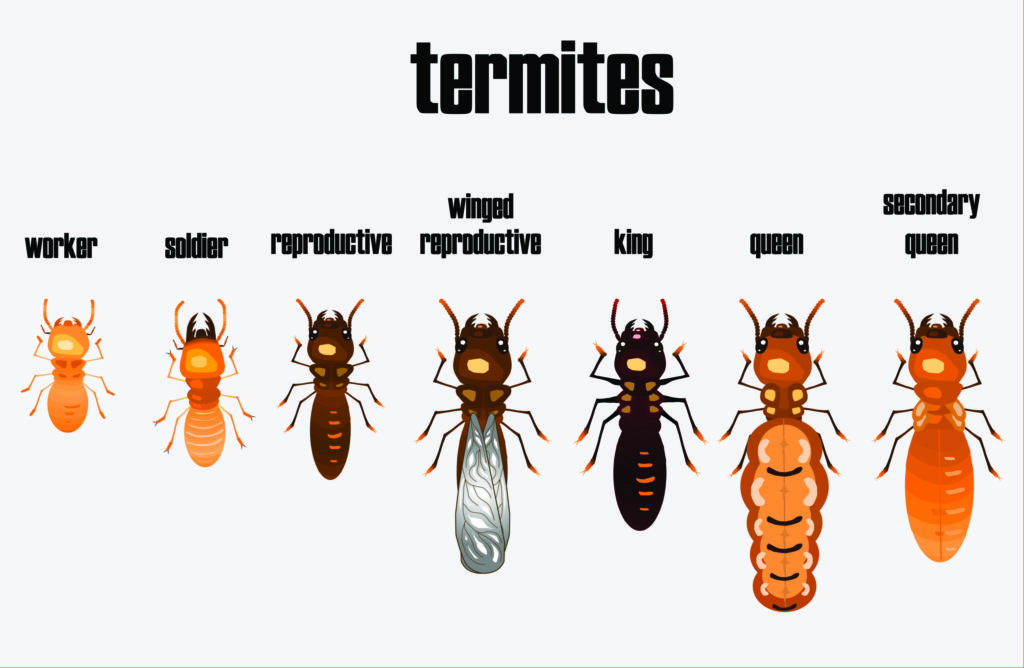 Termites have a caste system. Within this system are kings, queens, workers, soldiers, and reproductive.

A termite king and queen are responsible for producing eggs and sustaining the colony’s survival and growth.

Both the queen and king termite releases pheromones to suppress the development of other future kings and queens.

They regulate egg production to make sure that the colony allocates its resources optimally.

The workers are responsible for the labor inside the colony.

They are responsible for foraging for food and feeding the colony.

Workers also tend to the king, queen, and the young. They clean them, feed them, and maintain their chambers.

The youngest of the termite workers perform domestic tasks like feeding and grooming the king and queen. They are also assigned to care for the young.

Older workers, on the other hand, forage for food and build the nest.

Their bodies are soft, pale, and are the smallest of the castes.

Termite soldiers are responsible for defending the colony from intruders.

Soldier termites are typically bigger than workers. They have dark-colored heads and large mandibles.

Soldiers use to protect their colony from other insects, usually ants.

Because of their large mandibles, the soldiers cannot eat on their own; they must rely on the workers to feed them.

Reproductives, known as Alates, are the only type of termite that has wings.

They are the future kings and queens of termite colonies.

Alates use their wings to leave the nest and start new colonies.

Secondary kings and queens help the primary queen produce enough eggs for the colony to continue to grow.

What happens if you kill a termite queen?

Since the primary queen is dead, the pheromones that prevent other reproductives from becoming queen cease to exist.

This allows a secondary queen to assume her place.

If their termite queen dies and all reproductives in the colony, then the population will die out.

Can termites Reproduce Without a Queen?

Yes. If the queen dies, the secondary queens will take her place.

Future queens, known as Alates, fly during the mating season.

Once the mating is over, they lose their wings and settle on a new home.

What are the secondary reproductives?

Depending on the situation the secondary queen may mate with the primary kind or mate with a secondary king.

What are flying termites?

Flying termites are also known as swarmer or Alates.

Their primary purpose is to reproduce.

They fly to leave the nest to start new colonies.

Flying termites are future kings and queens of a colony.