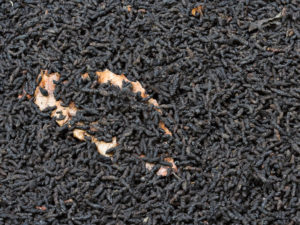 Because bats defecate while roosting on the roof, their droppings tend to be piled or collected in groups.

The droppings are typically black, soft, and quick to fall apart.

Sometimes you will see the droppings have a bit of sparkle. This color comes from undigested wings of the insects that the bats ate.

Individually they look like long thin pellets with blunt edges.

In general, bat droppings are about ¼ to ½ inches long and about ½ to 1 inch thick.

But their size of bat poop varies depending on the species.

For instance, the little brown bats’ poop is about the size of an uncooked rice grain. The big brown bats’ dropping is slightly larger.

Mouse and bat droppings are often confused with each other and not without good reason.

Both droppings are dark or black in color and are usually found in similar places, such as in the attic or sheds.

That said, mouse droppings are different from bat droppings in many ways.

Bat droppings also tend to be soft and crumbly when dry, while mouse droppings get very hard.

Finally, bat droppings tend to be sparkly, while mouse droppings are not.

The crumbly texture and sparkle on bat poop come from undigested wings of the insects they eat.

While you may find some parts of insects in mouse droppings, they’re not going to be as prominent as those found in bat droppings.

As such, mouse droppings turn hard when dry.

If you find yourself sweeping your porch or dropping, you’ll likely have bats living in your home.

If you have bats, you may also see some bats dropping on the sides of your home. That’s because bats tend to defecate on their way in and out of their harborage.

You can also find piles of bat droppings below where the bats roost or hang in the attic.

Old bat droppings can produce a fungus that can cause lung disease, known as Histoplasmosis when inhaled.

Histoplasmosis is a fungal infection that thrives in nitrogen-rich, humid, dark environments.

The severity of the infection will vary depending on how much spores you inhaled and your overall health.

Histoplasmosis can stay in your lungs for an extended period. You can also get reinfection if you are exposed to it a second time.

Bat droppings can also have parasites and other pathogens that can be harmful to touch.

For instance, bat poop can contain roundworms. Roundworms can become fatal when ingested or inhaled.

Bat poops can also cause structural damage by decaying the wood in your home.

Finally, bat poop can encourage household pests such as roaches and termites, to live in your home.

As such, removing any build-up of bat guano is vital.

The presence of bat poop in your home can be harmful to you and your family.

When removing bat poop, remember to wear proper protection when you’re dealing with bat droppings such as respirator and gloves.

Should I remove Bat Poop?

If you have a significant bat poop in your home, hiring a professional bat control service may be best.

A professional bat company will have the proper safety equipment to protect the working technicians when removing bat poop,

They will also ensure the environment is clean and disinfected to remove any hazardous residue and guarantee you and your family’s safety.

If the bat poop in your house is insignificant, you can opt to remove it yourself following the recommended steps.

Make sure to keep your kids and pets away from the area where the bat poop is located until you can remove it.

The presence of bat poop in your home can be harmful to you and your family.

When removing bat poop, remember to wear proper protection when you’re dealing with bat droppings such as a respirator and gloves.

How to clean up bat poop?

Before we go over how to clean bat poop, let’s discuss what not to do when dealing with them first.

When cleaning bat poop, do not:

Bat droppings can cause diseases when inhaled. Since they tend to crumble to powder when dry, the safest way to remove them is by dampening them first.

If there is a significant bat poop in your home, I recommend you call a professional for wild animal poop removal.

You should call a professional for wild animal poop removal.

To clean small amounts of bat poop, follow the steps below.

The first step to removing bat poop is to gather your equipment.

You’ll want to make sure you wear a respirator because bat poop contains several different types of bacteria that can harm you.

Wearing protective gloves is also essential to protect yourself from pathogens and prevent spreading bacteria.

Fill the spray bottle with water.

Next, dampen the bat droppings by spraying them with water.

Remove the droppings using a mop or cloth with soapy water.

Disinfect the entire surface with a diluted bleach solution ( 1:9 beach to water ratio).

Let the bleach sit for several minutes before wiping and rinsing.

Dispose of your gloves and wash your hands.

Dispose of the mop or cloth.

If you prefer to keep the mop or cloth, make sure to clean them with hot soapy water and disinfect it with bleach.

Where do bats poop?

Bat droppings generally pile up under where the bat hangs or roost.

Bats may also defecate as they enter and leave your property. So, you may find an accumulation of bat poop around the side of your property.

Do bats poop a lot?

Shockingly, bats can poop even when they are roosting.

To do this, bats use their thumbs to flip themselves right-side-up, poo, then go back to their original position.

Because bats poop a lot, the odor in areas where the bat resides can be powerful.

Also, since their poop is often mixed with urine, as such, it has the smell of ammonia.

What is bat poop called? 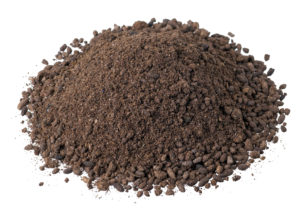 Guano w is the collected excrement of seabirds and bats.

It’s valued as fertilizer because it contains high amounts of nitrogen, phosphate, and potassium content.

What is bat poop used for?

Bat poop, known as Guano, is often used as a fertilizer for various vegetation such as fruit, flowers, and trees.

It’s valued as fertilizer because it contains high amounts of nitrogen, phosphate, and potassium content.

In particular, Guano consists of 10% nitrogen, 1% potassium, and 3% phosphorus.

Microbes in bat poop bat guano can help to cleanse toxicity in soils. They can also increase the soils’ ability to hold water by loosening the soil.

Overall, bat poop can play a valuable role in the environment.

However, they can also pose a potential danger if not handled well.

Bat poop should never be kept inside the house as it can be harmful when inhaled or touched.

Piles of bat poop can also encourage other pests such as roaches and mites to live in your home.

When handling Guano, exercise proper precautions, and wear protective gear such as masks, gloves, and goggles.