Many people confuse carpenter termites with ants. And not without good reason.

Both insects have antennas, a tiny body, and six legs.

Also, both carpenter ants and termites live in wood.

Nonetheless, correctly identifying these two pests is vital to terminate them.

In this article, we’ll go over all the differences between ants and termites. 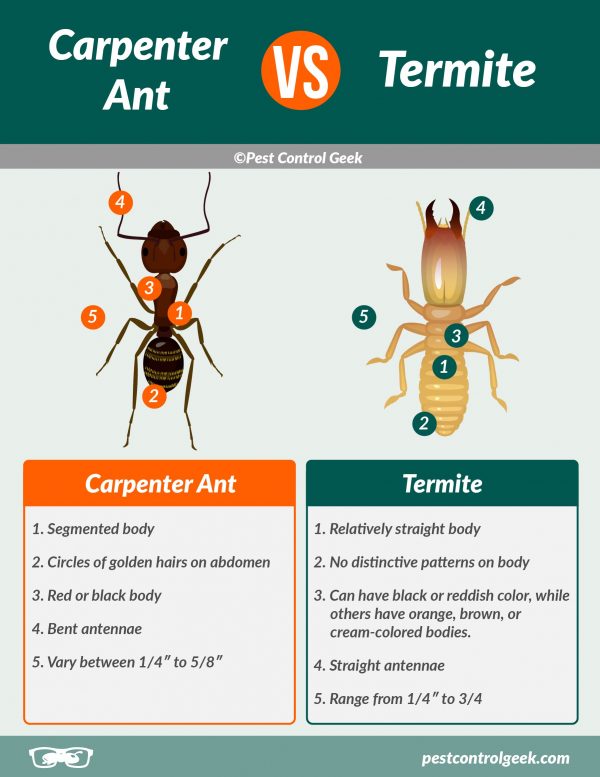 In general, Carpenter ants will have members between 350 to almost 2,000 workers per colony.

Termite colonies, on the other hand, vary between several thousand to a million members.

Termites get their primary source of nourishment from wood. But they will consume anything that has cellulose such as wallpapers, books, and glue.

In contrast, carpenters do not eat wood. Instead, they are attracted to sweets and dead insects.

They are called carpenter ants because they tunnel through wood and nest in it.

Carpenter ants and termites live in wood. The only exception is subterranean termites, which live in the soil.

Both these insects are attracted to a home with moist, rotting wood.

When they move into your home it’s usually for two reasons:

When the carpenter ant’s main colony reaches maximum capacity, they will scout an ideal place for one or more sub-colonies.

The sub-colony will provide more places to store food, infantries, and a backup territory should their main colony perish.

Ants fight each other for territory and resources. As such, there is constant pressure to expand colonies. 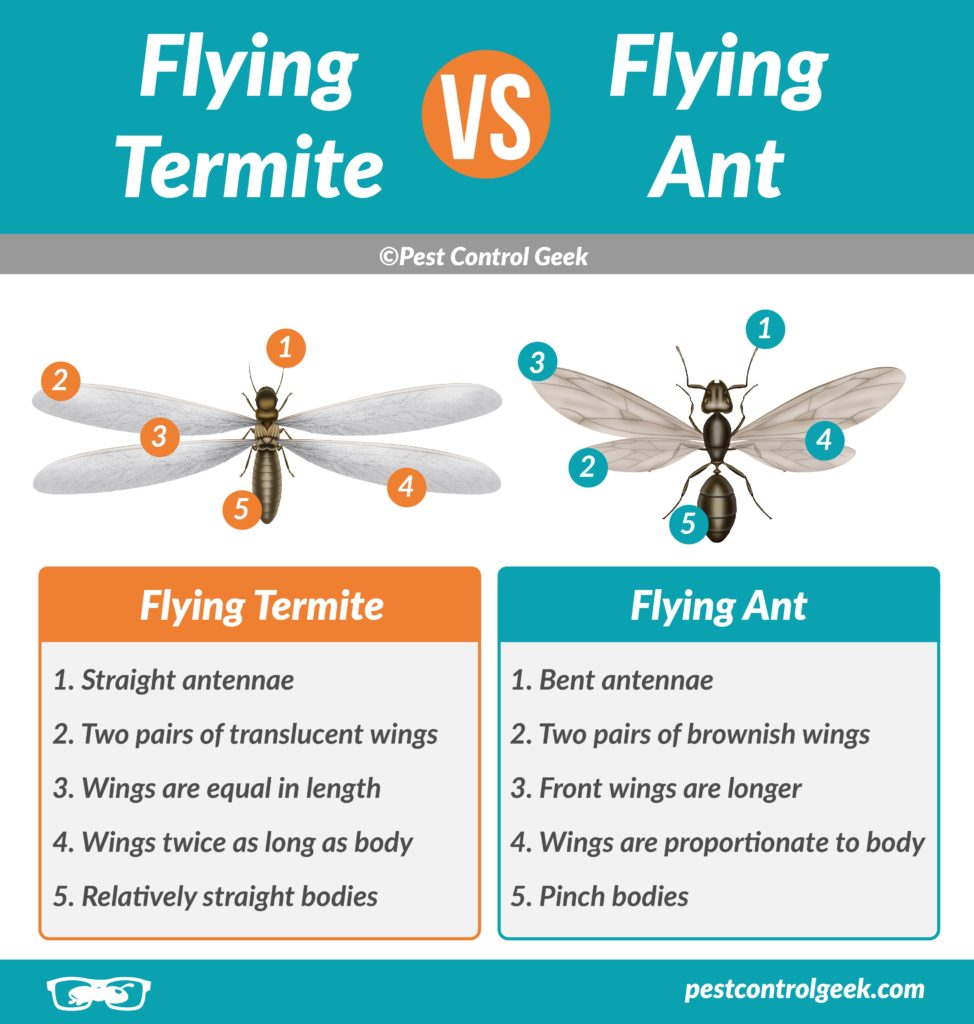 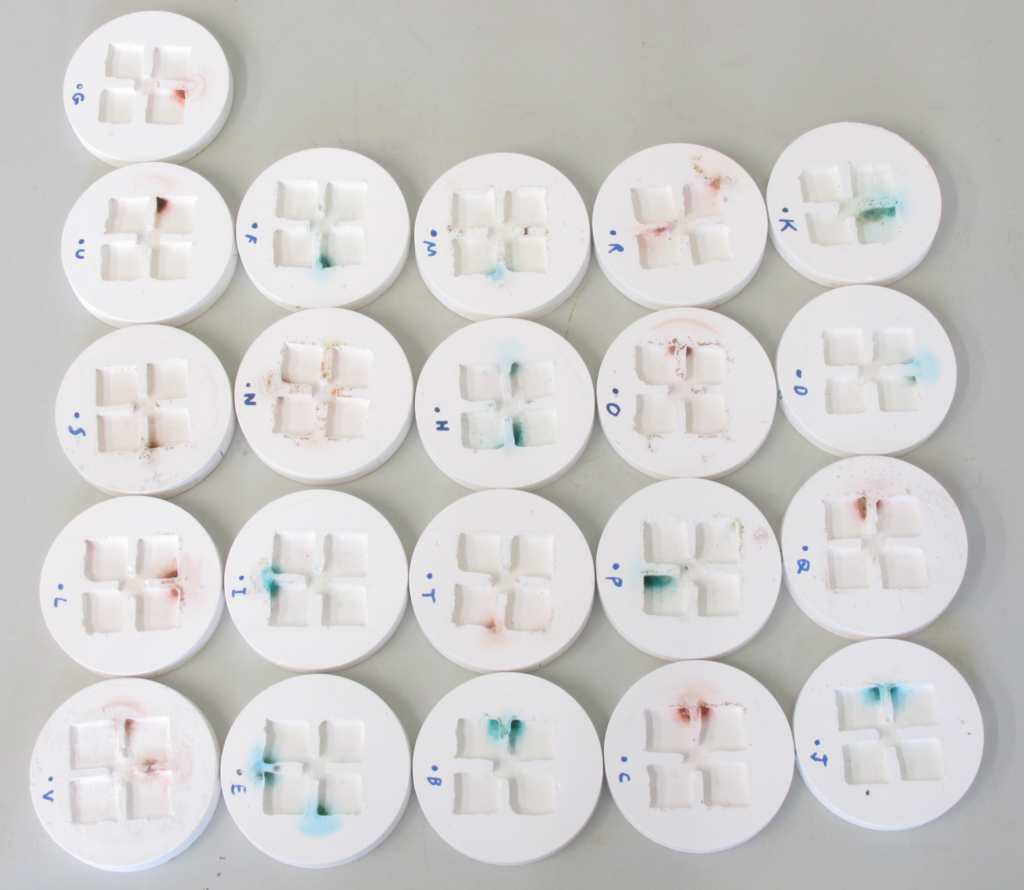 These patches are hard to come by in nature since ants only poop inside their nest.

Even if you were to come by a nest, ants droppings would blend in with the nests.

The most common way to examine ant droppings is by creating artificial ants nests in white containers.

Ants were fed food coloring to make it easier to make the droppings easier to spot on the white surface.

Termite droppings vary in appearance depending on the species of termites.

There are three common forms they can take: Pellets, Mud tubes, and Patches.

A mud tube is made of termite droppings, soil, saliva, and wood.

These tubes help protect termites when traveling between food and the nest.

Working tube and exploratory tube look like veins running up against your wall.

Termites use them to seal entry points around their nest.

Ant infestations are easier to spot than termites. That’s because ants forage on food and water out in the open.

Here’s what you should watch out for:

If you see black or red ants in your home, especially in large numbers, you may have an ant infestation.

You’ll typically find these in your kitchen and bathroom.

Many species of ants secrete a trail pheromone to attract other ants from their colony to a particular food source.

If you see ant trails around your home, it is a good indication of an ant infestation. 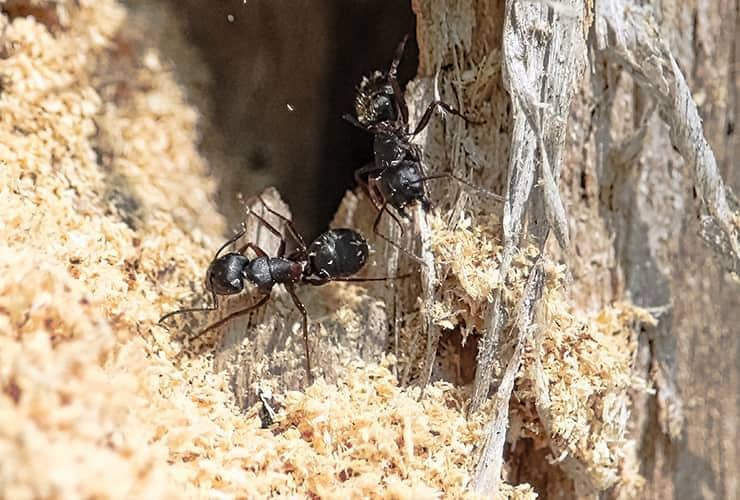 If you see ants swarming food in your home, it’s a strong indication that you have an infestation.

If you think carpenter ants live behind your wall, you can tap on the wall with a hammer and listen very carefully.

You might be able to hear them react if you place your ear against your walls.

You may also hear a quiet rustling sounds coming from the walls.

When worker carpenter ants create your tunnels, they make noises.

You can typically hear them scraping your woodwork.

Termite infestations are much harder to spot than ant infestation. That’s because termites are sneaky and hide in small, dark spaces.

Here’s what you should watch out for:

Flying termites signify a termite population is ready to expand into new colonies.

Mud tubes could be a sign of subterranean termites.

A mud tube is made of small pieces of soil and wood.

They also protect termites from dry environments when gathering food. 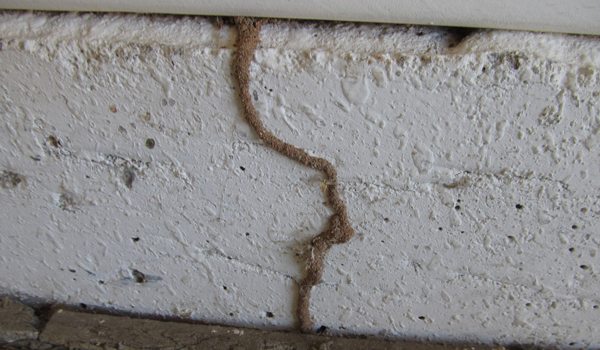 Uneven or bubbling paint could be a sign of termite damage. 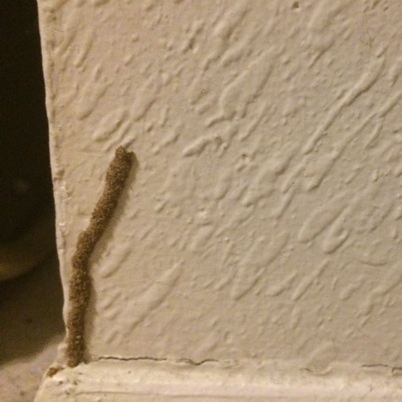 If you find a small pile of what looks like pellets inside or outside the home, it could be a sign termite infestation. 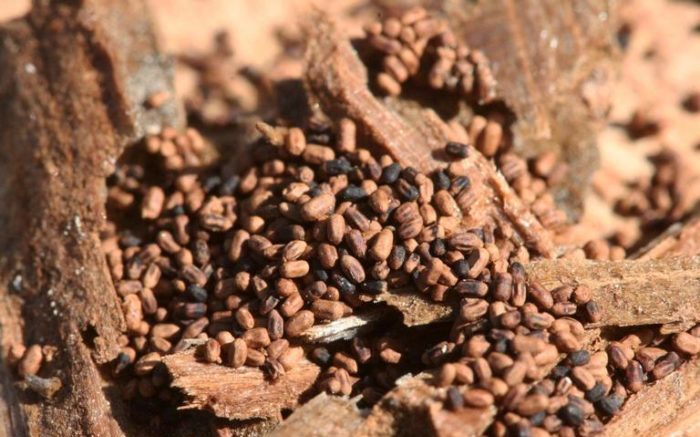 If you hear a quiet clicking sound coming from the walls, it could be a sign of termite infestation.

When worker termites eat your woodwork, they make noises.

Termites devour wood from the inside out, leaving a weak shell.

As such, when you knock on an area that has termite damage, it will sound hollow 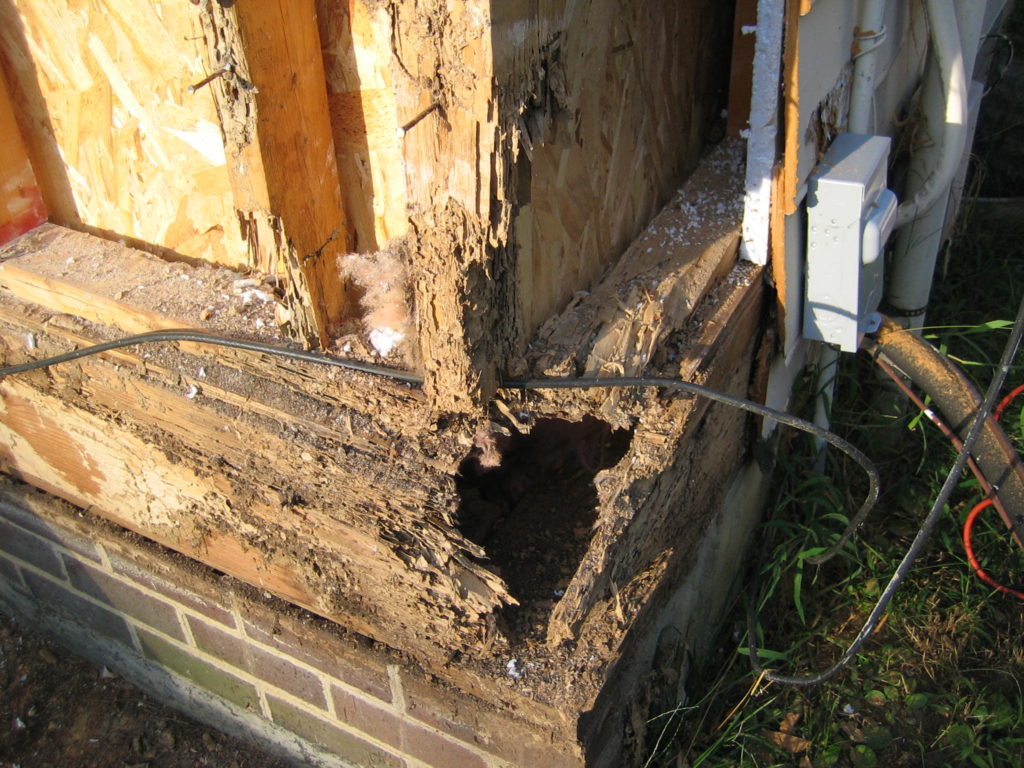 Carpenter ants create tunnels that have a neat, smooth finish.

On the other hand, termite leaves tunnels that are more messy and have a rough finish.

What Causes Flying Ants In Your House?

If you see one, that means there’s a mature ant colony that’s expanding nearby.

The particular time of the year varies per region.

But the purpose is all the same: to mate.

Flying ants emerge from their nest to participate in an event called the nuptial flight.

During the flight, virgin queens mate with males.

The males die shortly after mating, and female ants go on to start a new colony.

If you have an ant infestation inside or around your home, here are some factors to consider.

Ants are attracted to moisture.

To prevent an ant infestation, make sure to proper drainage systems.

You’ll also want to minimize the use of mulch in your home.

Layers of mulch provide ants with the perfect shelter.

It traps moisture and insulates against harsh temperatures.

If you must use mulch at home, make sure to replace old mulch with new ones at least once a year.

You can use rock, gravel, pebbles, rubber as an alternative to mulch.

Pebbles or gravel is typically too dense and compact for termites to tunnel through. As a result, they won’t be able to access the perimeter of your foundation.

Ants are attracted to unsealed food.

To avoid ant infestation, make sure to store your food correctly.

Carpenter ants love damp wood. To avoid these ants from staying in your home, replace any rotting or damaged wood.

You’ll also want to caulk crevices and voids in your foundation and walls. Ants are tiny and can enter even the smallest holes, so you can’t be too careful.

What Causes flying Termites In Your House?

If you see flying termites in your home, it’s an indication that you gave a termite infestation nearby, and it’s growing.

If there’s a swarm outdoors, they might have just stumbled into your home.

If no entry points or no swarm are happening outside your home, you likely have an infestation inside your house.

That means that the infestation in your home is large and needs to be addressed immediately.

Resource: What Attracts Termites To Your Home?

Which Is Worse Termites or Carpenter Ants?

While both present a risk to your home, termites will damage your home more than Carpenter ants.

There are several reasons for this.

The first is colony size.

Subterranean termites can grow their nest up to a million members.

Carpenter ants, on the other hand, will only have between 350 to almost 2,000 workers per colony.

Because of their large numbers, termites will cause more damage to your home and do it in a shorter time.

Termites are also sneakier than Carpenter ants. They eat and live deep inside the walls and soil.

As such, termites are some of the hardest pest infestations to identify. They could go on destroying your house for years before you become aware of them.

In contrast, Carpenter ants come from their nest to forage for food.

You’ll see them crawling around your home. Because carpenter ants expose themselves, it’s easy to identify and eliminate infestations before they get worse.

Another reason termites’ are more dangerous is their diet.

Termites eat wood, but carpenter termites only tunnel and nest in it.

As such, Carpenter ant damage is not as extensive as termite damage.

They tend to migrate to homes only when it has damp and rotting wood.

In contrast, Drywood termites will eat both damp and dry wood.

These two insects are ancient rivals.

Ants are known to raid termite mounds to feed on termites. The ants don’t demolish the entire colony. Instead, they only take some ants and come back for more.

Carpenter ants in particular will raid termite galleries inside wood to kill and eat them.

Ants can’t digest termites on their own.

To digest food, ants use a special pouch inside their mouth called the infrabuccal pocket to strain large food.

Anything that moves past the infrabuccal pocket is digested while everything else is spat out.

Other ants, such as fire ants, use their larvae to digest food.

Fire ants place the food on the larvae stomach.
The larvae then spit out chemicals to digest the food.

The result is a slime-like liquid that the workers can use to feed the rest of the colony.

No. Having carpenter ants in your home doesn’t necessarily mean you have termites.

But, the same things that attract carpenter ants attract termites.

Both insects are attracted to moist, rotten wood.

In most cases, Carpenter ants will not infest your house unless you have damp, rotting wood.

If you keep the wood in your home maintained, Carpenter ants will usually stick to the trees.

So, while having Carpenter ants doesn’t necessarily mean termites, they are a good indication that you have a problem that could lead to termite infestation.