Home » Product Reviews » What Do Termites Look Like (With Images)

There are many types of termite species. Each one is unique in their biology, behavior, and appearance.

Termites will differ in size, color, and shape depending on what species of termites and their role in the colony.

That said, all termites have six legs and two straight antennae.

Their size generally ranges from ¼ inch to ¾ inch. And termites have soft, segmented bodies.

The best way to identify the different species of termites is by comparing the soldier termites.

Soldier termites between different species of termites look the most distinct from each other. 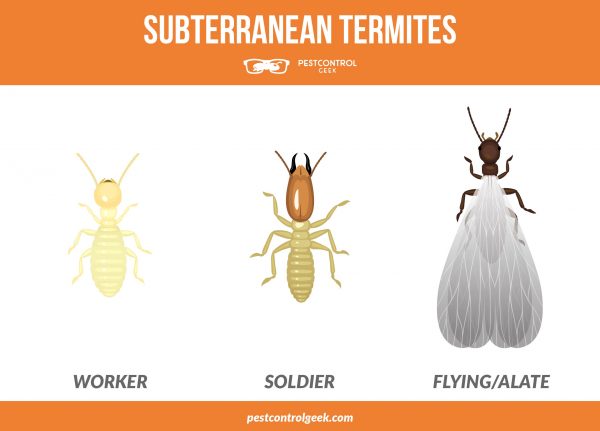 Subterranean termites live in soil but will enter homes to feed on anything that has cellulose, including the foundation, walls, roof, etc.

Their colonies are the largest of any insects in the US, reaching up to a million members each. 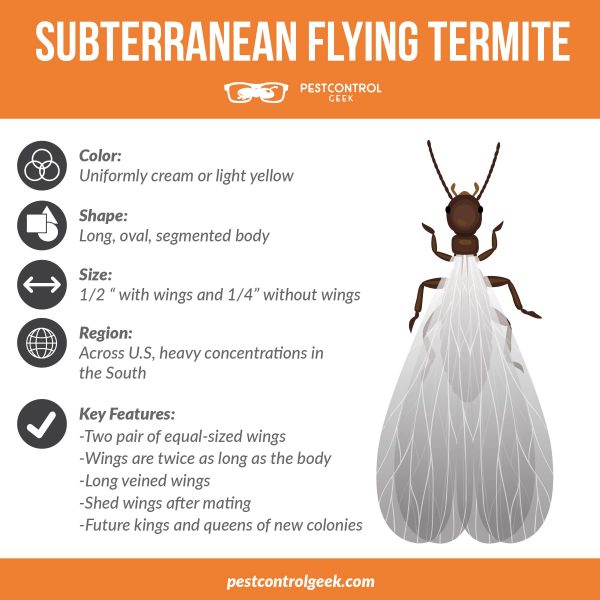 Subterranean flying termites have dark brown bodies that can reach up to one inch in length.

They are characterized by their long, translucent wings.

Their wings are equal in size and twice as long as their bodies.

Flying termites are the only type of termites within their colony that have wings.

They use their wings to leave their nest and start a new colony. 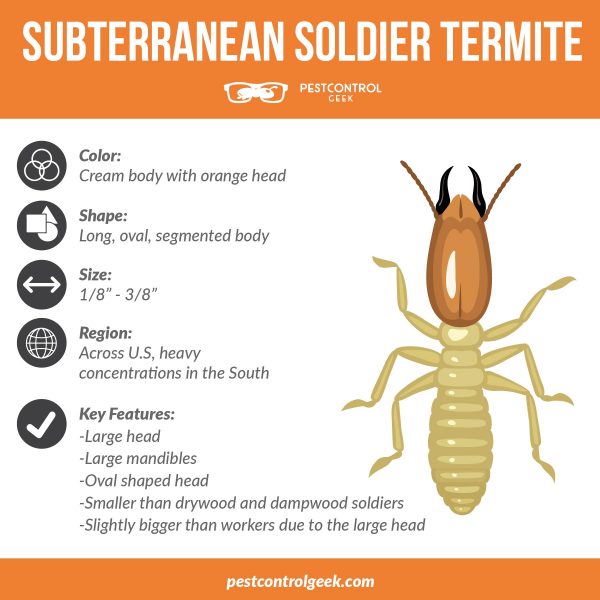 Subterranean soldier termites have large mandibles for fighting off other insects.

But they have smaller mandibles compared to Drywood and Dampwood soldier termites.

They also have a smaller and less wide pronotum.

They have a creamy white body that can grow between ⅛ and ⅜ of an inch in length. 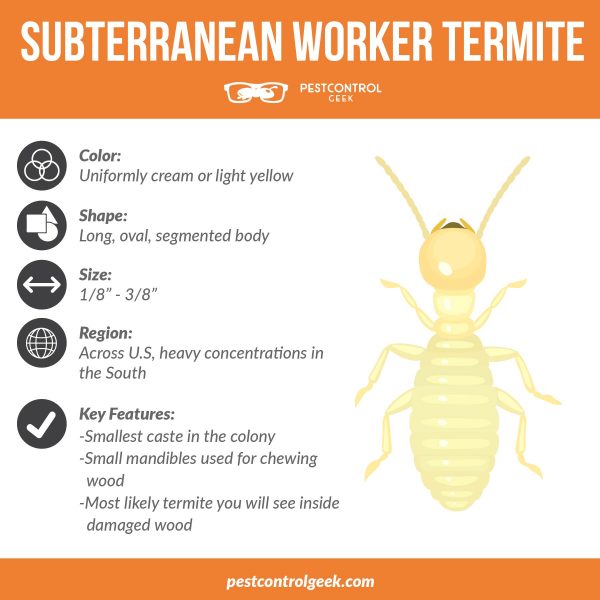 Subterranean worker termites have pale white bodies that grow up to ¼ inch.

They have small mandibles for chewing. 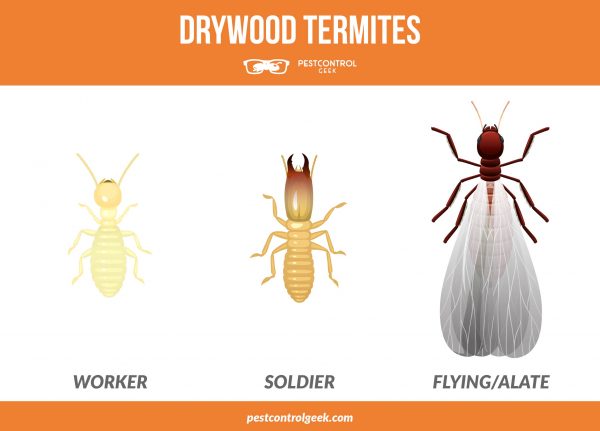 Unlike subterranean termites, drywood termites do not require contact with soil.

They nest in wood, such as dead trees, walls, or wooden floors and furniture. 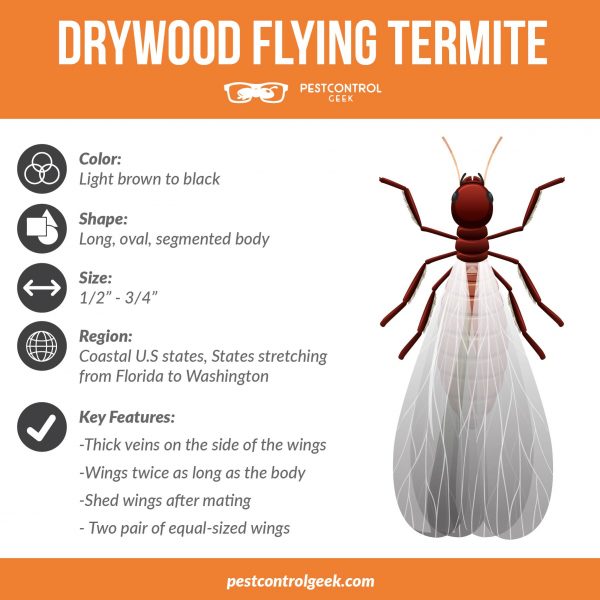 Their bodies can range from a reddish-orange to black and grow up to ½ an inch in length. 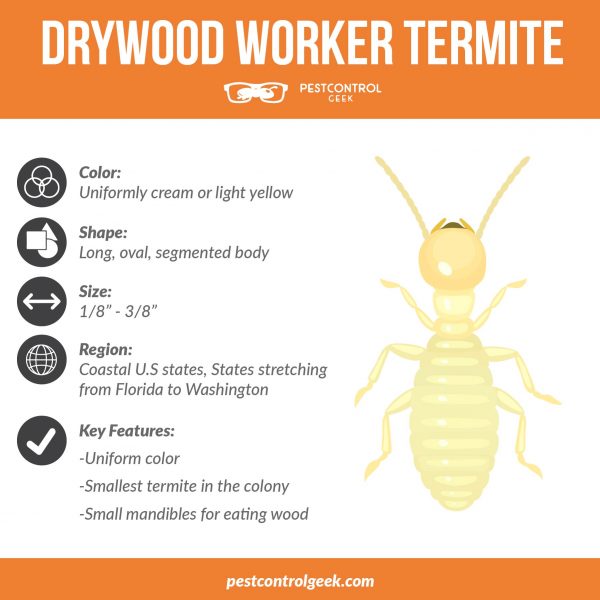 The only exception is that they take on a more pale white color. 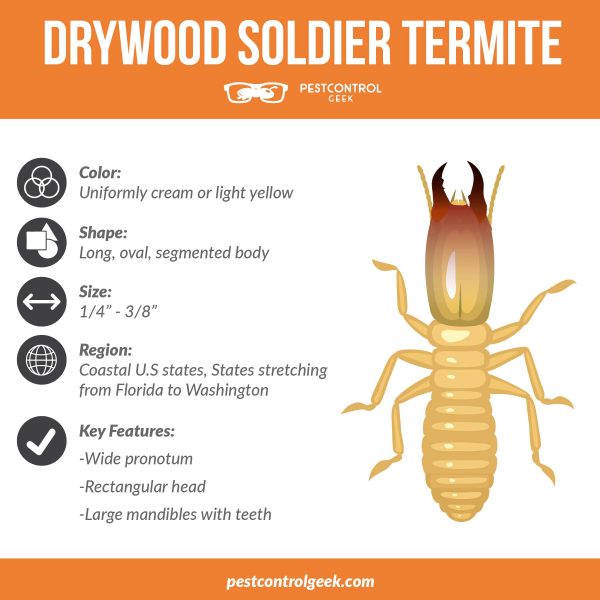 They have an orange head with black or dark brown mandibles.

They have a tan body that is just slightly larger than subterranean termites at around 3/8th of an inch. 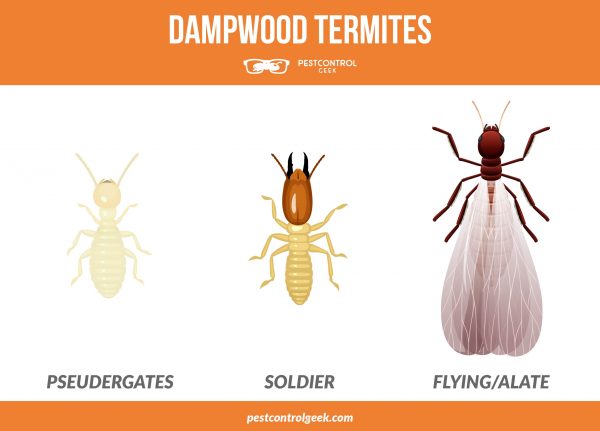 Dampwood Termites are the largest termites in North America.

They live in wood with high moisture content and are known to infest damp and rotting wood. 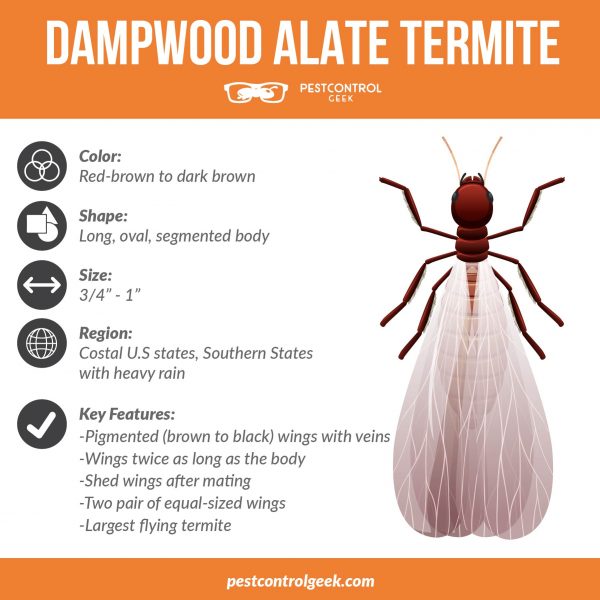 Dampwood flying termites have two pairs of wings that are equal in size and shape.

Each fore wing has five pigmented and enlarged veins.

They grow up to an inch in length and are reddish-brown to dark brown in color. 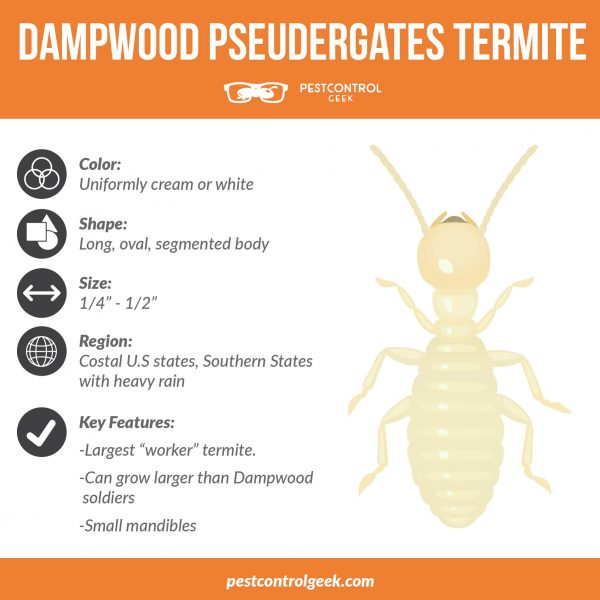 Dampwood termites are different from other termites in they don’t have workers.

Instead, they have the nymphs, known as Pseudergates, to do the job typically done by termite workers.

Like termite workers, Pseudergates forage for food, take care of the young, and build nests.

Dampwood Pseudergates are cream-colored and are larger Drywood and Subterranean termite workers. 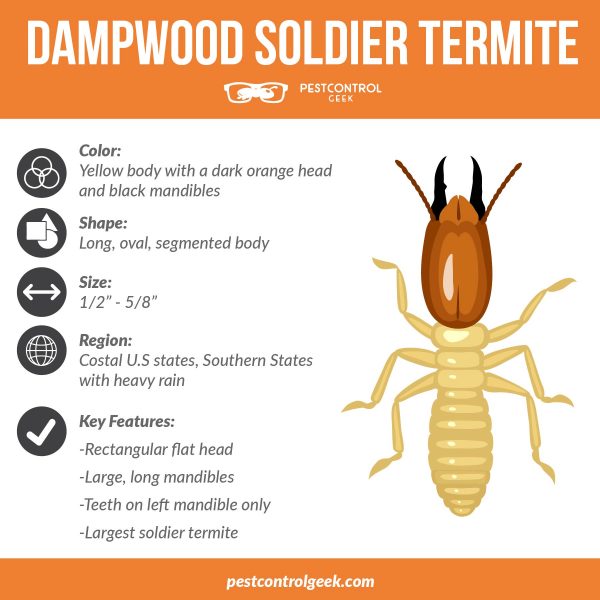 Soldiers are about half an inch in length.

Their bodies are solid orange, and their pronotum is as wide as their head.

They have large dark mandibles with two visible teeth on the left mandible. 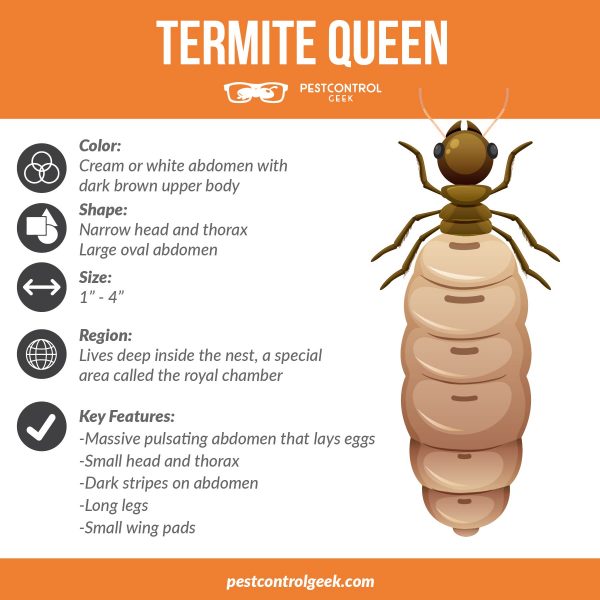 The termite queen has a tiny head attached to a large abdomen that measures up to four inches.

Her abdomen has a yellowish color that’s translucent enough for you to see the pulsating liquid inside. 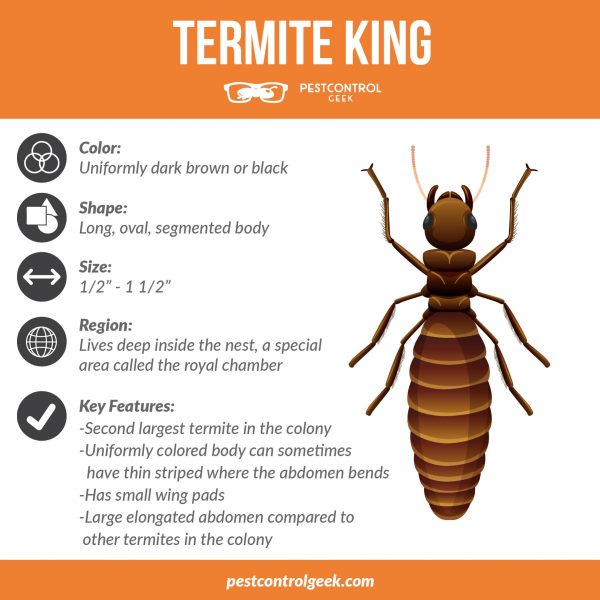 Compared to the termite queen, however, the king is significantly smaller.

What Is The Termite Caste System?

Termites have a caste system. Within this system are kings, queens, workers, soldiers, and reproductive.

Each caste plays a specific role in ensuring the growth and survival of the colony.

A termite king and queen are responsible for producing eggs and sustaining the colony’s survival and growth.

Both the queen and king termite releases pheromones to suppress the development of other future kings and queens.

They regulate egg production to make sure that the colony allocates its resources optimally.

The workers are responsible for the labor inside the colony.

They forage for food, feed the colony, build and repair the nest.

Workers also tend to the king, queen, and the young.

They clean them, feed them, and maintain their chambers.

The youngest of the termite workers perform domestic tasks like feeding and grooming the king and queen.

They are also assigned to care for the young.

Older workers, on the other hand, forage for food and build the nest.

Their bodies are soft, pale, and are the smallest of the castes.

Pseudergates are members of the Dampwood termite colony.

Instead, they have the nymphs, known as Pseudergates, to do the job typically done by termite workers.

Like termite workers, Pseudergates forage for food, take care of the young, and build nests.

The nymphs can grow into reproductives later if needed.

Termite soldiers are responsible for defending the colony from intruders.

They are generally bigger than workers.

Soldiers have dark-colored heads and large mandibles they use to protect their colony from other insects, usually ants.

Because of their large mandibles, the soldiers cannot eat on their own; they must rely on the workers to feed them.

Reproductives, known as Alates, are the only type of termite that has wings.

They are the future kings and queens of termite colonies.
Alates use their wings to leave the nest and start new colonies.

Secondary kings and queens help the primary queen produce enough eggs for the colony to continue to grow.

Why is Termite Identification Difficult?

Termites are difficult to identify because they live deep inside wood or soil.

They are sneaky and often go unnoticed until the infestation has grown.

Termite damage or termite swarms are often the first indications of termite infestations.

But, termite swarms and damage only happens once the colony is mature.

That means, termites can infest and damage home for years without being identified.

How To Identify Termites From Their Damage ?

You’ll typically find subterranean damage on or near the soil.

You may find them near your pipes, in your attic, crawlspace, or along your foundation.

Mud tubes help Subterranean termites to travel safely
between a food source and the nest.

Working tube and Exploratory tube look like veins running up against your wall.

Drywood termites live inside the wood.

To identify if you have Drywood termite, look for kick-out holes and pallets around your home.

They look a lot like sand or sawdust. But unlike sand, a drywood pellet has six concave surfaces.

They are hard, elongated, and less than 1/25 inch long.

Drywood pellets can be different colors, depending on the color of the wood termites have been eating.

You’ll find pallets next to kick-out holes. Drywood termites use “kick out” holes to remove pellets from their tunnels.

These patches look like soft concrete plastered on damaged wood.

They are typically easy to spot because the coverage is imperfect.

That’s no surprise as both are tiny and impossible to identify without close inspection.

Nonetheless, correctly identifying these two pests is vital to terminate them.

Here are their differences:

Both the front and back pairs of wings are equal in length and twice as long as their bodies.

Unlike termites, they have two brownish pairs of wings.

Their wings are unequal, with the front side being longer.

Their wings are also shorter and more proportionate to their bodies.

Ants are the most common insect that looks like termites.

Not only are ants and termites similar size and body structure, but they both create colonies and caste systems.

The most common ants that are confused with termites are Carpenter ants, Acrobat ants, and flying ants.

Other insects that are commonly mistaken for termites are:
Silverfish

What Do Termites Look Like To The Human Eye?

While termites are small, they are visible with the human eye.

They are comparable in size and appearance to most household ants.

They have six legs and two straight antennae.

Their size ranges from ¼ inch to ¾ inch, and they have soft, segmented bodies.

Winged termites, or Alates, are generally larger and are much easier to identify.

Unlike other termites, Alates also go out in the open to mate. As such, they are typically the first sign of infestation homeowners recognize.

What Are Signs You Have Termites?

Unfortunately, there are no standard devices that make it easy to detect termites.
The most common way to inspect for termites is to look for visual signs.

Here are some that you should watch out for:

Resource: Top 13 Signs You Have Termites