Home » Insect » False Widow Spiders: How To Identify and Get Rid of Them Forever

Black windows are one of the most menacing and dangerous spiders in the world.

If you see one in your home it can be concerning. But do you really have a species of widow inside your home?

Did you know there is species of spider that looks like a widow but it’s not?

Before you begin to panic it’s important that you make sure you confirm the species of spider inside your home.

In this post, I am going to help you identify and get rid of false widows.

What Is A False Widow Spider?

False black widow spiders are a species of spider that is commonly found around human populations. It’s widely spread throughout the world, including North America, Australia, and Europe.

This spider gets its name from its similarity to the deadly black widow spider.

Other common names for the false widow spider are the cupboard spiders, brown house spider, or dark comb footed spider.

How To Identify a False Widow Spider? 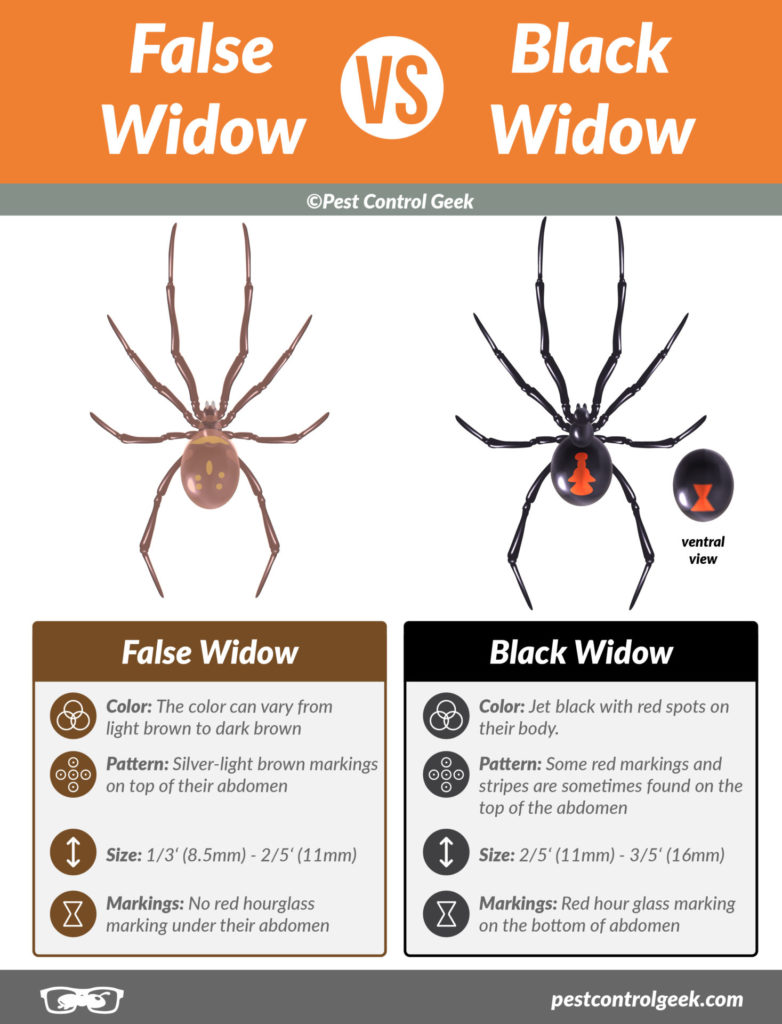 The false widow spider and black widow spider have some similarities, but you can differentiate them if you know what you’re looking for.

Below are their key differences: 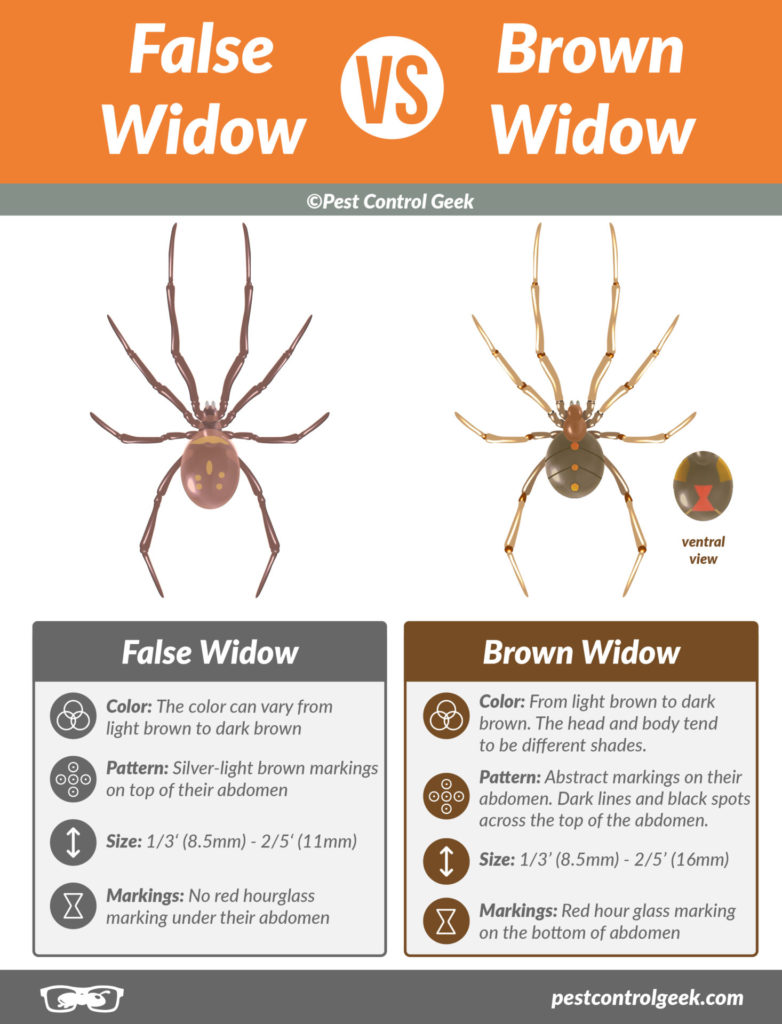 Brown widows are the cousin of the black widow. These spiders are venemous like the black widow, but it is reported that their bites are less painful and less venemous.

How To Get Rid Of False Widows

The first thing you can do to help get rid of false widow spiders is to seal all entry points.

Like most other spiders, spiders can only get into your home if there is an entry point.

You might think because false widow spiders are long and big that they don’t fit in certain places. The reality is that they can fit into very small entry points.

Below are some areas that you should ensure are sealed to prevent false widow spiders from entering your home.

Taking all the steps above will make it much harder for spiders to enter your home. The next several steps will help you address the spiders that are inside your home.

2. Clean and Declutter your Home

If you have false widow spiders inside your home, it’s good to clean up and remove any clutter.

False widows, like other spiders, thrive in clutter. The more clutter there is inside your home, the more shelter you provide for false widows.

They prefer areas that are secluded and dark. This gives them somewhere to hide and build their webs without being distrubed.

It’s also ideal to always bag or box things to prevent spiders and other insects from living within your belongings.

Cleaning and decluttering are essential in basements, garages, cellars, closets, storage rooms, or unused rooms because this is commonly where false widow spiders prefer to live.

Key places that often get overlooked when cleaning include: behind and under furniture. It’s important to move everything to ensure that you are cleaning as much as possible.

One of the main reasons false widow spiders tend to infest homes is because there is a consistent food source that they can survive off of. False widow spiders are a sign that there are other insect problems inside or outside your home.

One thing you can do is eliminate or address the other insects living inside your home.

Depending on the types of insects that are in your home may require various steps. In most cases, the most effective way to reduce the number of insects outside your house is to apply an insecticide barrier. This will kill any insects that attempt to enter or walk around your home.

Water-damaged areas can provide enough moisture for false widow spiders even after the water source is addressed.

Certain areas of your home are naturally more humid than others. To reduce humidity, you can use a dehumidifier in these areas. Common areas where dehumidifiers might be necessary include:

To reduce the population and make your home less appealing, I recommend using a vacuum to remove all webs, live spiders, and egg sacs in your home.

This is an effective and fast way to remove webs, spiders, and egg sacs and to dispose of them properly.

I recommend using a vacuum cleaner with a tube extension that allows you to easily get spiders and webs on ceiling corners, behind furniture, or in other hard-to-reach areas.

The most effective type of insecticide is one that has a residual effect.

The most effective type of insecticide for false widow spiders is a residual spray. A residual spray provides a lasting effect that will kill any insects that come into contact with the insecticide between 3 and 6 months later.

When applying insecticide spray you want to target your foundation as well as 3 feet upwards from the floor on your walls.

You should also apply the residual spray around doorways and windows to prevent spiders from trying to sneak into your home.

You should also consider spraying any outside structures to prevent false widow spiders from making their home inside those. This includes sheds, garages, and patios.

You can also apply the residual insecticide to your grass, plants, and other areas outside your home.

Remember to double-check the label before applying your insecticide. Make sure that it’s safe for application on plants. It should also mention how long before animals or children can use the grass again.

7. Use Glue Boards To Monitor And Kill Stragglers

To eliminate false widow spiders that are already inside your house is using glue boards.

Glue boards tend to be very effective at eliminating any remaining spiders and monitoring your home activity. They will help you identify which rooms in the house see the most activity and where you should focus your attention.

They also allow you to trap and eliminate the infestation while you sleep. Place these glue boards under appliances, furniture, baseboards, guidelines, and any other place you’ve seen spiders.

As bait, you can place a small insect at the center, which will draw false widow spiders towards the trap.

Yes, false widows are dangerous compared to other common spiders.

A bite from a false widow is painful and can cause temporary side effects.

Overall, their bites are generally harmless, and the side effects will subside after 2-3 days.

These spiders are less dangerous than black widow spiders, but they should still be taken seriously.

If a false widow bites you, it’s best to visit a doctor so that they can monitor your condition and the status of the bite.

The venom of a false widow bite is not lethal. While their venom is not lethal, lase widow spider to inject venom when they bite.

It’s important that you monitor and care for the site of the bite. Without proper care, spider bites can become infected. Infections can lead to many other complications, including those that can cause death.

In some cases, untreated or ignored spider bites can become infected and lead to sepsis which can be deadly.

What Happens If a False Widow Bites You?

The bite of a false widow is painful. While the bites of other common household spiders is not, you will feel when a false widow spider bites you.

The bite of a false widow is slightly more painful than a bite of a wasp sting.

Typically after being bitten by a false widow, you can expect some swelling and redness. If the swelling is extensive or blistering or puss, this is a sign of an adverse reaction to the bite.

If these symptoms are present, you should seek medical attention for a false widow bite.

Likewise, if you experience any other symptoms such as wheezing, difficulty breathing, nausea, vomiting, or diarrhea you should also seek medical attention.

Most false window spider bites don’t cause any serious side effects other than at the bite site.

Where Do False Widow spiders Live?

Should I Kill False Widow Spiders?

Yes, If there are false widow spiders inside your home, you should get rid of them. While you don’t have to kill them, you can remove and place them outside.

While they are not ideal inside your home, having false black widow spiders is not a big deal outdoors.

These spiders are not aggressive. If left alone they are typically harmless. If infestations get too large, it’s also best to start eliminating them outdoors as well.

In large populations, you increase your chances of accidentally getting bitten by a false widow spider. Their bites can be painful but in most cases are relatively harmless to humans.

What To Do If I Find a False Widow Spider?

If you find a false widow indoors, you should get rid of it. In most cases, relocating it outdoors is sufficient to handle the situation.

If you find false widow spiders outdoors you can typically leave them alone. As long as they are not in an area where children or people are likely to come in contact with it and get bitten.

For example, if you continue to find false widows on playground set where children frequent you want to take steps to eliminate the false widow population.

On the other hand, if you find false widows on your trees this is less on a concern and you can leave the false widow alone.

As their name suggests, false widows look like the dangerous species of widows that strikes fear in everyone.

Below are dangerous spiders that look like false widows:

Other species of spiders that look like false widows but are harmless include: