Home » Insect » Stink Bugs: Can they Fly and How To Get Rid of Them

Stink bugs are not pleasant. Not only do they stink, but they also fly everywhere.

Not to mention that these invasive species tend to swarm in large groups.

If stink bugs are flying around your house, don’t worry, I’m here to help.

In this post, I’ll go over what stink bugs are and how to get rid of them.

What Are Stink Bugs? 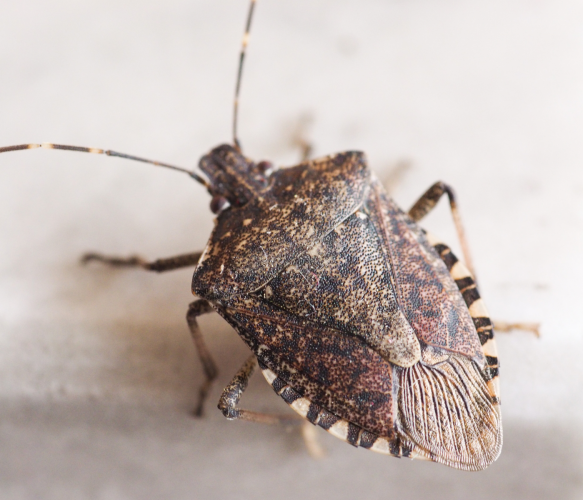 Stink bugs are agricultural pests native to Asia. This adaptable species was accidentally introduced to the U.S during the 1990s.

Today, stink bugs are found across the entire U.S as well as many other countries around the world.

These insects are versatile and can survive in many different weather conditions.

There are several different species of stink bugs. The most common and invasive species is the brown marmorated stink bug.

Stink bugs get their name from their tendency to release an odor when frightened or killed.

Stink bugs are found across the U.S, but they pose the greatest threat to farms and gardens, where they cause most of their damage.

Inside homes, they can be found in warm locations near sources of food.

Stink bugs are large, oval-shaped insects that measure between ⅝ of an inch or 17mm.

They have a dark brown or greyish color.

Stink bugs are easy to identify for their unique pattern or markings on their back.

They also have their signature white stripes on the edge of their abdomen.

Their legs are significantly larger than that of bed
bugs.

These insects have long antennas and strong back legs.

They can fly between 1 ad 3 miles every day. Adults are considered strong fliers. They tend to use wind currents to their advantage to fly much longer distances.

Nymph stink bugs, on the other hand, can’t fly because they don’t have wings. Nymphs don’t develop wings until they become adults. This is when they begin flying.

Yes, stink bugs make a buzzing noise when they fly. Their buzzing sound is quite noticeable compared to other flying insects.

Their buzzing noises are especially pronounced when stink bugs are flying in clusters.

Do Stink Bugs Fly or Jump?

Stink bugs fly and do not jump. They are great climbers and flyers.

If you find them on sides of walls or furniture, they likely flew there and latched on.

They are great crawlers, and you will find them hiding on ceilings and walls on the exterior of your home.

While they don’t really jump, their short burst of flight can make it look like they jump, but their back legs are not powerful enough to jump like fleas or other insects.

Yes, stink bugs can fly fast. They are strong fliers and often use wind currents to their advantage to help them fly faster and longer distances.

While they can fly fast, they tend to fly out of control.

Often they will run into people and walls by accident.

Why Do Stink Bugs Fly At Me?

This means that with large infestations it’s likely that stink bugs will fly into you.

No, baby stink bugs can’t fly. Nymphs do not develop wings until their final molt when they become an adult.

While they do go through multiple molts they don’t develop wings until their fourth and final molt.

If you do see a flying stink bug this is a clear sign that they are full grown adults.

Why Do Stink Bugs Fly At Me?

This means that with large infestations, it’s likely that stink bugs will fly into you.

Why Do Stink Bugs Eat?

Stink bugs are mainly agricultural pests that feed on crops, leaves, and flowers.

Unlike bedbugs, they don’t pose any biting threat to humans.

Although they are primarily agricultural pests, they can live in urban areas. They can survive on a wide variety of vegetation, including weeds, grass, and plant leaves.

As a result, they can live anywhere they can find consistent vegetation.

While not as common, stink bugs also eat fruit and, in some cases, other insects such as caterpillars and beetles.

How To Get Rid Of Stink Bugs?

The best way to get rid of stink bugs is to keep them out of your house, to begin with. The most common way that stink bugs enter your home is through cracks, crevices, and holes.

Stink bugs will land in an area and look for every possible area there is to try to enter a home.

The best way to seal and cracks or crevices is using caulk. Caulk is fast and effective and will allow you to seal and potential entry points.

Another way you want to seal entry points is by replacing any screens around your home.

This includes doors, windows, or vents. This will ensure that there is no potential entry point.

Another way you can get rid of stink bugs is to weather proof your home. There are two key steps to weatherproofing your home

Below are some areas that you should ensure are sealed to prevent stink bugs from entering your home.

Biological control methods are one of the most effective and common methods to get rid of stink bugs.

This makes it dangerous to use pesticides or another method to eliminate them.

Biological control allows you to get rid of stink bugs by introducing a predator naturally.

Some of the most common biological control methods include:

These species of animals will feed on stink bugs and help you remove them.

Whether stink bugs are inside or outside your home, vacuuming them is an effective way to get rid of them.

Vacuuming allows you to suck them up without touching them quickly. Also, since they tend to cluster in similar regions, it’s easy to vacuum various stink bugs quickly and effectively quickly.

Typically a normal vacuum will suffice. But to ensure that the beetles die, you can use a wet-dry vacuum and add water and dish soap to make sure that they drown once you vacuum them.

Stink bugs are attracted to light. One way you can eliminate stink bugs is that you can turn off lights around your home.

You can also keep your lights off or use black-out curtains to get rid of stink bugs.

If you are trying to get rid of stink bugs outside of your home or garden, insecticides are the best option.

The best way to get rid of stink bugs is to use granules and liquid insecticides.

You can apply granules to your yard and use water to activate the insecticide and help it drench into the soil.

You can use liquid insecticide and apply it to your home’s surface and around common entry points.

If you are experiencing stink bugs around your garden or other areas of your home, you can use bug zappers.

Bug zappers are effective because stink bugs are attracted to heat and light, which bug zappers both provide.

A higher voltage is ideal because it ensures that you kill the larger stink bugs. Lower voltage traps are great for smaller flying insects such as flies, moths, and midges.

Suction traps are a great alternative to using bug zappers. These are ideal near your home.

Since bug zappers can leave bacteria behind due to the splatter, similar to bug zappers, you want to purchase a larger suction trap.

Smaller suction traps might not be strong enough to catch stink bugs.

In some cases, the openings might be too small for a stink bug.

Always double-check the size of the traps to ensure they are large enough for stink bugs.

You can also get rid of stink bugs to cover your plants or other sources of food around your home.

This is a great way to protect your garden and other plants from stink bugs feeding on them.

The fewer food sources around your home, the less appealing it will be to stink bugs.

Over time stink bugs will fly away in search of food and water to survive.

You especially want to remove any rotting or decaying vegetation. This will make it harder to stink bugs to find something to eat.