Wondering what to do with the Jerusalem crickets hanging out under the rocks in your garden?

Don’t worry we’ve got you covered.

In this post, we’ll go over everything you need to know about these tiny insects. From appearance to preventions, we’ll cover them all here. 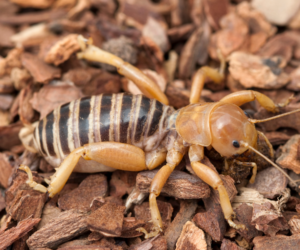 Body: Jerusalem crickets have large heads and small faces with long antennae. They have tiny eyes with poor eyesight.

Wings: They do not have wings. Instead, they hop around to travel. Their legs are also equipped to dig in the soil.

Where Do Jerusalem Crickets Live?

Jerusalem crickets generally live outdoors. Although they may sometimes stumble into your house in search of food, water, and shelter.

Jerusalem crickets are most active at night. They spend the day hiding under rocks, grass, and flowerbeds.

What do Jerusalem Crickets eat?

While these crickets are often referred to as potato bugs, they rarely eat potatoes.

Their diet consists primarily of insects. But they will also eat decaying plants and insects.

What Is The Geographical Range of Jerusalem Crickets?

They are native in Western U.S but have spread to some states of Northern U.S and Central America.

They are very adaptable and can live in nearly any habitat including deserts and rainforests.

Life Cycle of A Jerusalem Cricket

Adults mate during springtime. When it’s time, these crickets send vibrations to attract their partner.

After mating, females eat the male. She will then lay eggs about 3mm long.

The eggs will hatch into a nymph, which will undergo a series of molts before becoming adults.

The time it requires to become an adult is about two years.

How Do They Get Inside?

While Jerusalem crickets are live outdoors, they may sometimes stumble inside your home through open doors and windows, cracks and crevices, or gaps in your doors.

How Serious Are Jerusalem Crickets?

Jerusalem crickets may look scary, but they are completely harmless to pets and humans. They are not venomous, and they don’t bite unless provoked.

They live outdoors, so there’s no need to worry about indoor infestations. Although if large numbers of them invade your home, getting rid of them can be a nuance.

Also, Jerusalem crickets often help gardeners by eliminating other insects inside your garden. This often happens as they come across other insects as they forage, but they typically don’t actively hunt.

While they do eat plants, they often target decaying plants. That said, Jerusalem crickets may target live plants if there’s no other food available. They can also sometimes be damaging to young plants. These crickets can suck on the roots, leaves, stems, and fruits of plants and hinder their growth.

Jerusalem crickets are garden pests. So, the most common signs of infestation will be their appearance in your garden and flower bed. You may also find the in large numbers under rocks or any items that have direct contact with soil.

Another sign of Jerusalem Cricket infestation is hissing or scratching sound.

How Do I Get Rid of Jerusalem Crickets?

The two most popular ways to eliminate Jerusalem crickets are to use Diatomaceous Earth and Neem oil. Both of these products are safe for crops and environmentally friendly. Another way to eliminate them is by creating a homemade trap with petroleum jelly.

Diatoms are made of silica which is useful to humans in many ways. We use DE to treat high cholesterol levels and improve skin, nails, teeth, bones, and hair.

While this safe for humans and pets, it destroys insects’ exoskeletons, eventually killing them.

To use DE against Jerusalem crickets, spread a thin layer of DE on areas where the crickets live and travel. Ideal places are under rocks, on grass, and flowerbeds.

Keep in mind DE is not effective when wet. So you’ll have to redo treatment if it rains.

For easier application, I recommend mixing DE with water and spraying it on infested areas. While the spray solution won’t be effective upon application, the DE will take effect once the solution dries.

Neem Oil is a popular insect repellant for centuries. This compound works to inhibit insects from reproducing and feeding. Neem oil also kills larvae before they hatch.

Here’s how you can eliminate Jerusalem crickets in your home:

Another way to eliminate Jerusalem crickets is to use traps.

For a homemade trap, place petroleum on cardboard and place it where the crickets are. The insects should stick to the trap. Once the trap is full, discard and create a new one until you’ve eliminated the problem.

You can also buy glue traps in-store or online.

How to prevent Jerusalem Crickets?

The easiest way to avoid Jerusalem crickets is to make your home less appealing. Eliminate any large rocks in your garden where they can hide. Don’t overwater your plants. Excess moisture will draw these insects and other pests into your home.

To keep Jerusalem crickets away from your house, make sure to caulk any cracks, crevices, and voids. Make sure your doors and windows don’t have holes and gaps are sealed well.

Yes, Jerusalem crickets bite, but only when provoked. While the bite can hurt, it’s not venomous and doesn’t carry diseases.

What sound does Jerusalem cricket make?

Unlike what many people think, Jerusalem crickets do not sound like crickets. They sound more like the hissing sound of rubbing two sandpaper together. They create this sound when they rub their hind legs against their abdomens.

Are Jerusalem crickets dangerous to dogs?

Not really. Jerusalem crickets are pretty harmless to people and pets. They may sometimes bite when threatened. While their bite might hurt your dog a little, they are not poisonous nor does it carry disease.

Does a Jerusalem cricket bite hurt?

While Jerusalem cricket’s bite can hurt, it’s not venomous and doesn’t carry diseases. It also doesn’t release any toxins that will make it stingy.

That said, their bite can hurt quite a bit since these tiny insects have strong jaws. To keep Jerusalem crickets from biting, it’s best to stay away. They generally won’t bite, unless threatened.

Are Jerusalem Crickets a Pest Problem?

No. Jerusalem crickets are not considered pests. That’s because they do not really eat live crops. They primarily target rotting, dead plants.

Also, Jerusalem crickets are entirely harmless to pets and humans. They are not venomous, and they don’t bite unless provoked.

They live outdoors, so there’s no need to worry about indoor infestations. Although if large numbers of them invade your home, getting rid of them can be a nuance.