Humans have used mosquito predators as to control mosquito population for centuries.

You may think that these pests are too small to be nutritious, but many animals eat mosquitoes as their primary diet.

In this article, we’ll go over the different species of animals, large and small, that specialize in eating mosquitoes.

BTI is a naturally occurring bacterium found in soils.

BTI is excellent for places where water cannot be emptied, such as fountains, ornamental ponds, and irrigation ditches.

It comes in many forms, including pellets, granules, tablets, and liquid.

BTI presents no toxicity to people, crops, bees, and animals.

When used as directed, BTI can be applied safely without harming crops or water supplies.

Many BTI products are designed specifically for homeowners and are safe and easy to use.

While some commercial use BTI products may require you to wear a mask when applying, most require no extra precautions.

BS is a naturally occurring bacterium that targets a variety of mosquito larva.

They can come in the form of granules, powders, or liquid concentrates for mixing with water.

To use BS against mosquitoes, you can spray it from the air or the ground.

It has no harmful effects to humans, crops, animals.

Lagenidium is a fungus that parasitizes mosquito larvae.

One advantage of this parasite is that it does not need mosquitoes to survive. It can grow on rotting vegetation and dead insects.

As such, it can thrive and stay in an area so that when a mosquito lays eggs where these fungi are present, they can attack the mosquitoes.

One limitation of this pathogen is its intolerance to polluted water and salinity.

That said, there are many mosquito breeding areas where these environmental limitations do not exist, making this pathogen effective for mosquito control.

Beneficial Nematodes are parasites used as a biocontrol for pests.

They attack insects but don’t pose any harm to plants, pets, and humans.

They are highly efficient at eradicating mosquitoes infestations and can be applied using an aerial sprayer.

Predatory copepods are small aquatic crustaceans found in the most freshwater and saltwater habitat.

As such, they are an effective bio-control for mosquito production.

The largest of these predators copepod species can kill up to 30–40 larvae per day.

Another advantage of copepods as a bio-control is their abundance. Because you can find them in nearly all salt and freshwater bodies, they are relatively inexpensive to produce.

You can place copepods on permanent water containers as a natural way to control mosquito larvae.

Copepods can survive for several months in these containers, which means they can provide long-lasting control of mosquito populations.

Like mosquitoes, dragonflies are aquatic insects. They lay their eggs in water. Their larvae develop in water as well.

Because they share the same habitat, mosquitoes are an easy meal for dragonflies.

Despite being fatal to mosquitoes, adult dragonflies do are harmless to humans.

Toxorhynchites Rutilus’ larvae prey on disease-carrying mosquitoes that share the same habitat as them.

A single larva can eat up to 5,000 mosquito larvae before it matures and leaves the water.

Tx. Rutilus adults are the largest mosquito in the USA with a wingspan of nearly ½ inch.

Luckily these giant mosquitoes do not feed on human blood, so they don’t bite.

While their larvae are voracious cannibals, adult Tx Rutilus feed exclusively on nectar for sustenance and egg production.

Tx. Rutilus is also known as “elephant mosquitoes” due to their trunk-like proboscis. They use these to help them in sucking nectar from deep flowers.

Since these mosquitoes feed peacefully on sugary substances, they do not transmit diseases like their mosquitoes prey. 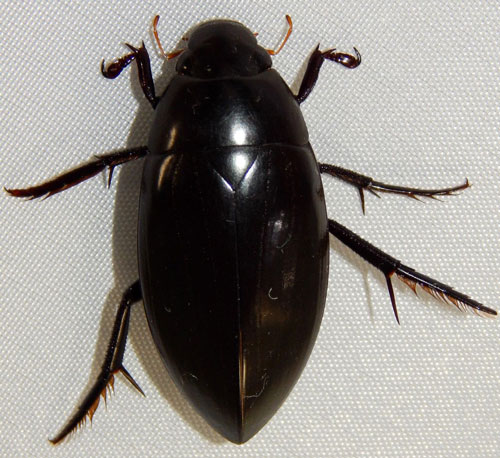 The giant black water beetle is the largest aquatic beetle across the United States.

Like mosquitoes, this beetle needs to be in the water to reproduce. They dwell in freshwater, generally large and deep ponds.

They have a diverse diet, including tadpoles, small fish, decaying plants and small insects such as mosquitoes.

Because these mosquitoes share the same habitat as mosquitoes, they can be used as a bio-control for mosquito population.

Evarcha culicivora, also known as the vampire spider, feed on female Anopheles mosquitoes only after they’ve had a blood meal.

The jumping spider Paracyrba wanlessi prey on both adult and larval stage mosquitoes, regardless of whether they’ve sucked blood.

Like all jumping spiders, wanlessi possesses excellent eyesight, which allows them to capture mosquitoes in flight.

These spiders are found only in Malaysia, water-filled decaying bamboo.

They are great at hunting mosquito larvae living in bamboo shoots. 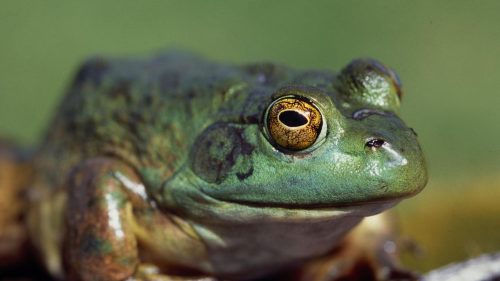 Juvenile frogs or tadpoles are generally herbivores. Their primary diet consists of plants and algae.

However, there are a few frog species whose tadpoles are known to eat insects such as mosquitoes.

When tadpoles develop into adults, they cease to be herbivores and change their diets to insects like flies, moths, dragonflies, and mosquitoes.

Frogs also have a healthy appetite for small animals like mice, snakes, turtles, and other frogs.

That said, frogs are not a very good bio-control for mosquitoes.

While adult frogs eat mosquitoes, they are only a small part of their diet.

In one study, researchers observed over two thousand frogs’ diet and concluded that mosquitos consist of less than 1% of their food.

Because mosquitoes are not crucial in a frog’s diet, frogs are unlikely to have much of an impact on mosquito populations.

Also, adults frog eat other beneficial mosquito predators such as dragonflies and fish.

Fish is another well-known predator of mosquitoes.

Some of the most popular ones are Mosquito fish, Guppies, and Threespine stickleback.

These fish are tiny, enabling them to thrive in shallow waters where mosquito larvae live.

Another advantage of mosquito fish as a biocontrol is that they are tolerant of a wide range of environmental conditions, such as temperature and salinity.

Today they are used around the world as an alternative to using pesticides to control mosquitoes. 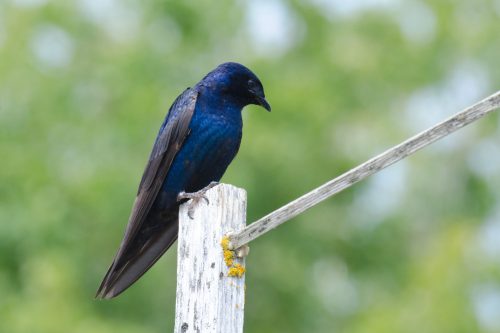 Birds are another mosquito predator.

Purple Martins, in particular, are voracious mosquito eaters. A single purple martin can eat anywhere between 2000-14000 mosquitoes a day.

Purple Martins are found in almost every region of the United States.

They nest around areas where mosquitoes lay their eggs and develop such as streams, rivers, and marshes.

Other popular birds that eat mosquitoes are Barn swallows and Songbirds.

Barn swallows are a cousin of purple martins.

They are known for diving and swooping to catch their prey.

Barn Swallow captures mosquitoes one insect at a time.

A single Barn Swallow can consume 60 insects per hour or 850 per day.

Songbirds love to eat mosquitoes as well. However, they prefer other insects such as centipedes and spiders.

Camponotus schmitzi is an ant species that prey on mosquitoes larvae.

These ants are also known as the diving ant, swimming ant, or pitcher-plant ant because of their ability to dive into plant’ pitchers.

These ants would then swim and feed on the mosquito larvae living in the pitcher plant. 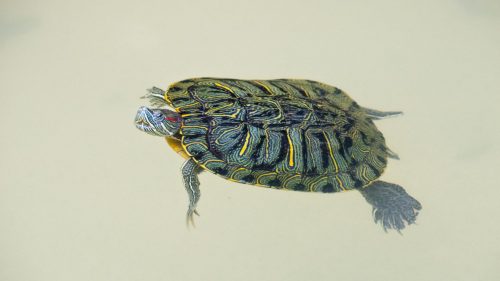 Turtles’ diets are diverse and include small fish, and insects, plants, and mosquito larvae.

Like mosquitoes, turtles are aquatic and semi-aquatic reptiles. They thrive in still water where mosquitoes lay their eggs.

Because they share the same habitat, mosquito larvae are a convenient prey for turtles.

Turtles, particularly like to eat mosquito larvae that are in the third and fourth stage of development.

They are voracious eaters and have been observed to eat between 1000 – 2000 of them per day.

Bat feed exclusively on insects, worms, and other invertebrates.

They mostly eat flying insects such as beetles, wasps, and moths. But they are also a known predator of mosquitoes.

A single bat can eat anywhere between 600 and 1,200 mosquitoes an hour.

Free-tail bats, in particular, are known to be voracious mosquito eaters.

Bats have been used to control mosquito populations since the early 1900s.

The best way to use bats as a bio-control for mosquito population is to create a bat house near your home.

And if you’re worried that bats being dangerous, don’t be.

While it’s true that bats can carry rabies, less than one percent of their population contracts it, which is a much lower rate than other animals in the wild that can carry rabies.

Bats are not aggressive and will generally leave you alone.