Home » Product Reviews » Bugs That Look Like Termites: A Guide for Identifying Termites 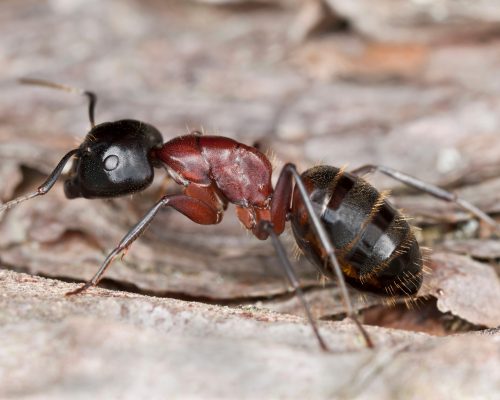 Many people confuse carpenter termites with ants. And not without good reason.

For one, their bodies resemble one another. Both insects have antennas, a tiny body, and six legs.

Also, both carpenter ants and termites live in wood.

Termites eat wood, while carpenter ants will tunnel into wood to create their nest and colonies.

So how do you differentiate the two insects?

One of the easiest ways to identify between a carpenter ant and some termites is their color.

Carpenter ants are typically red, black, or a combination of both.

Subterranean termites, on the other hand, are cream-colored and pale.

Dampwood termites have colors ranging from yellowish-brown to cinnamon-brown.

A drywood termite has colors that can vary between tan to dark brown.

Termites, on the other hand, have straight antennae and relatively straight bodies.

You can also sometimes find carpenter ants out in the open, in search of food.

Since carpenter ants don’t eat wood, they leave their nest in search for food.

But termites stay in their hiding spaces unless disturbed or are ready to mate. During mating seasons, you will see flying termites in a swarm. 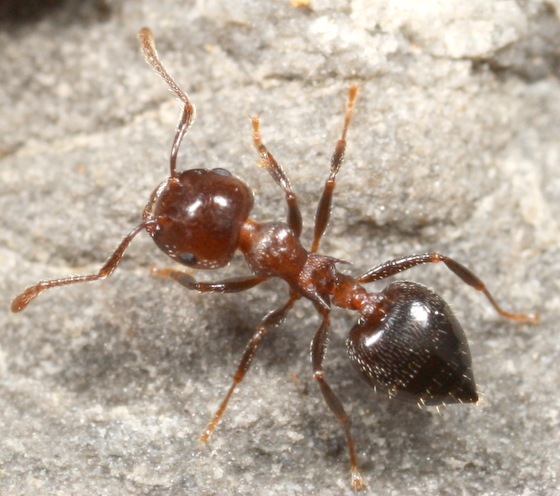 Similar to termites, they have small bodies, antennae, and six legs.

But, unlike termites, Acrobat ants have bent antennae.

They also have large heads, a skinny waist, and a huge abdomen.

They are also distinct from termites because you’ll typically find them near wirings and pipes.

You will also often see a line of these ants in an infestation—something you wouldn’t observe with termites. 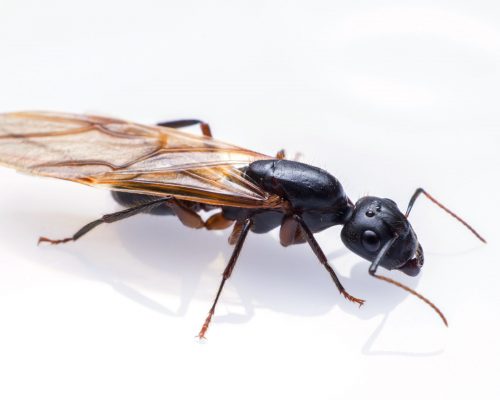 Both have tiny bodies with two pairs of wings.

But, unlike termites, flying ants have bent antennae and pinched bodies.

Their wings are also shorter, unequal length, and more proportionate to their bodies.

Termites, on the other hand, have wings that are equal in length and twice as long as their bodies.

Trying to identify an ant or termite mid-flight is nearly impossible. 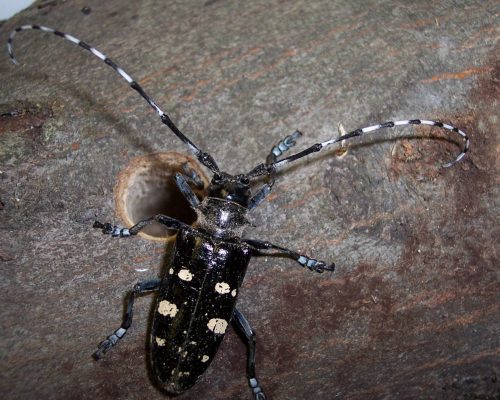 Longhorned Beetles are often confused with termites because their larvae live in wood.

While they typically infest trees, these beetles can infest your house or wood furniture.

Longhorn beetles lay their larva inside a wood.

To do this, they create a small hole at around ⅛ inch thick.

Their early stage larva also resembles termites with its cream-like color and light brown at the tips.

To identify if termites or long-horned beetles created the holes in your home, look for traces of termite dropping or pellets next to the holes.

You can also expect these holes to be significantly larger than termites. 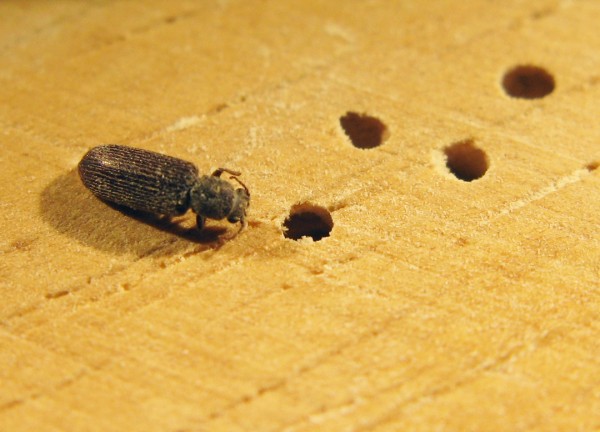 While adult beetles and adult termites are easy to distinguish, their larva is not always the case.

Similar to termites, Powderpost beetle larva is light and tan in color and lives inside the wood.

Their larva also leave holes and sawdust that highly resemble that of drywood termites’ kick-out tunnels.

To identify if termites or Powderpost Bettles beetles created the holes in your home, look for traces of termite pellets next to the holes.

Pellets, a.k.a frass, are termite droppings.

You can also expect these holes to be significantly larger than termites. 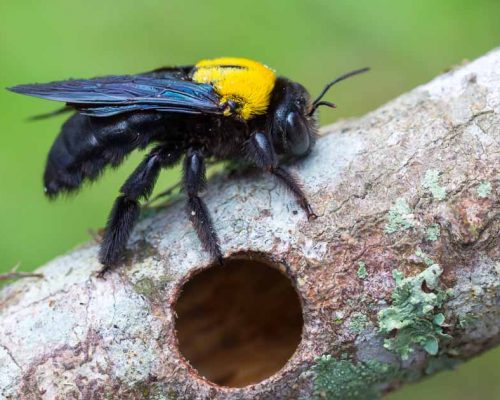 Like termites, carpenter bees infest wood and leave sawdust-like debris around the wood their infesting.

But, unlike termites, they do not feed on the wood.

Instead, they drill tunnels inside of wood to make their nest.

This only happens with large infestations after years of successive drilling tunnels.

These networks of tunnels can grow up to 10 feet long over time.

As such, a prolonged infestation can compromise the integrity of the wood.

This is unlikely to happen to your home without you noticing.

In most cases, the damage caused by the carpenter bees is mainly superficial and can be repaired quite easily.

An easy way to tell the difference between a carpenter bee and termite infestation by inspecting the holes they leave behind.

Carpenter bees leave much larger, round holes than termites. In contrast, termite kick-out holes are smaller and not as round.

Carpenter bees holes are also few and far apart. But, termite kick-out holes come in dozens and are more bunched up together. 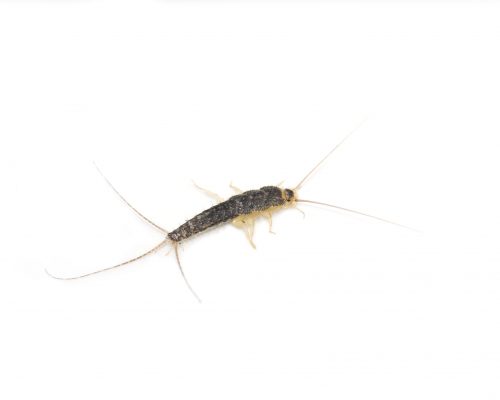 Silverfish have often mistaken them for termite.

Just like termites, they are tiny insects who are notorious for their destructive feeding habits.

But unlike termites, they do not feed on and live inside the wood.

Silverfish prefer to dwell in dark, damp areas such as basements, attics, kitchens, and bathrooms.

They thrive on softer cellulose materials such as starch, glue, cardboard, shampoos, and books. They also like damp fabrics.

In terms of appearance and behavior, they are quite different too.

While silverfish aren’t fish, they have scales and move in a side-to-side motion like swimming.

Silverfish are fast-moving insects that move with a snake-like motion.

In contrast, termites crawl with their legs. 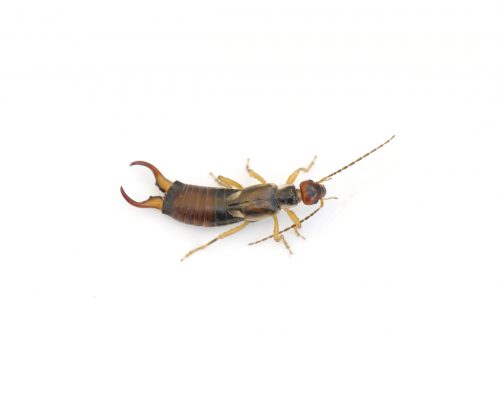 Earwigs and termites both have tiny, segmented bodies with six legs.

That said, there are many differences between these two insects.

First, termites have a hierarchy caste system. They have a king, queen, workers, and soldiers.

In contrast, Earwigs do not have a social structure or castes.

Earwigs are also dark brown to black. Termites, on the other hand, are usually light in color.

They also move much faster than termites. 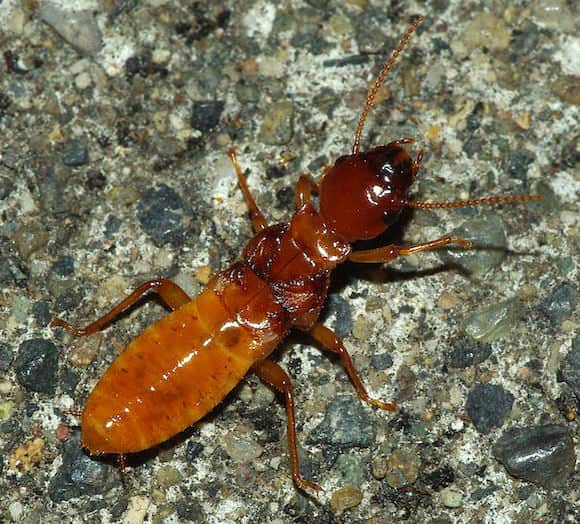 Dampwood termites grow up to ¾” long.

They are much larger than both the Subterranean and Drywood termites.

They have colors ranging from yellowish-brown to cinnamon-brown.

They also have a flat brown head and long dark brown to black mandibles.

Their Reproductives, also known as Alates, are dark brown with brown wings. 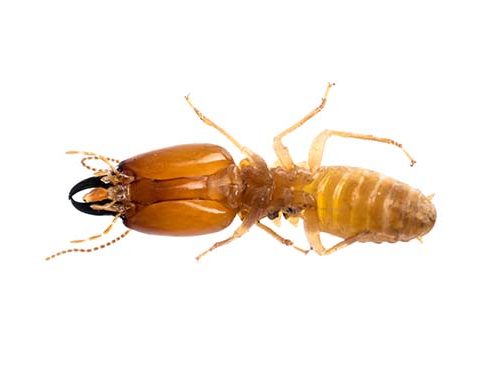 Drywood termites can vary from light brown to dark brown in color with the head darker than the rest of the body. 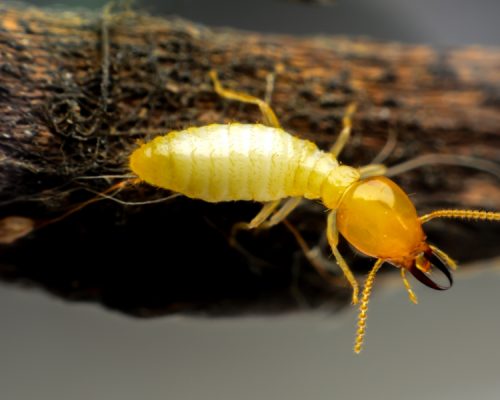 Their head can be light orange to dark brown. They have 6 legs and 2 straight antenna.

What are signs of a termite infestation?

To identify termite infestations, watch out for:

Mud tubes are made of termite droppings, soil, saliva, and wood.

These tubes help protect termites when traveling between food and the nest.

The working tube and exploratory tube look like veins running up against your wall.

Uneven or bubbling paint could be a sign of termite damage.

If you find a small pile of what looks like pellets inside or outside the home, it could sign termite infestation.

Weird Noises
If you hear a quiet clicking sound coming from the walls, it could be a sign of termite infestation.

When worker termites eat your woodwork, they make noises.

You can typically hear them eating if you place your ear against your walls.

Termites devour wood from the inside out, leaving a weak shell.
As such, when you knock on an area that has termite damage, it will sound hollow.

Flying termites signify a termite population is ready to expand into new colonies.

Termites cannot physically harm you, but they are dangerous in other ways.

These pests feed on the wood structure of your home from the inside out.

By doing so, they leave your floors, ceilings, and walls prone to collapse.

How do termites get into my house?

Termites can crawl into your home through the tiniest of spaces.

These little insects can get through a hole as small as 1/32nd of an inch.

That said, different termites tend to enter your house in different ways.

Subterranean termites, for instance, will generally enter your house along its foundation and around your plumbing.

They can also enter through cracks in your patios and chimneys.

Dampwood termites enter your house through infested lumber and mulch.

Swarmers will also sometimes enter your house because they are attracted to light.

If you leave your outdoor light on and there are swarmers around, the swarmers will likely come to your house.

Once the swarmers are inside, they will settle on damp wood and begin a new colony.

Swarmers will typically fly directly onto the wood on your home and begin to start their colonies.

They typically don’t enter through the soil since they can and prefer to eat dry wood.

How long do termites live?

A worker and soldier termite lives for one to two years.

Female reproductive will go on to become a queen of a new colony and live up to 50 years.

Do Termites have wings?

Only one type of termite in a colony has wings–the reproductives.

Reproductives are also known as swarmer or Alates.

Their primary purpose is to reproduce. They are future kings and queens of termite colonies.

Alates fly to leave the nest to start new colonies. They lose their wings soon after they mate.

Can termites get through concrete?

But, they can get through cracks as small as 1/32nd of an inch.

Cracks between the foundation and corners of your home typically offer plenty of space for termites to get it.

Some termites turn wood into construction tools after digesting its nutrients.

They turn their feces (pellets) into tunnels and structures that protect their colonies from predators and the environment.

By turning wood into the dirt, they nourish the soil and provide nutrients to plants.

That said, termites will eat anything containing cellulose.

That includes cardboard, paper, and fabric.

How Can I Identify termite droppings?

Termite droppings vary in appearance depending on the species of termites.

There are three common forms they can take: Pellets, Patches, and Mud tubes.

But unlike sand, a drywood pellet has six concave surfaces.

They are hard, elongated, and less than 1/25 inch long.

Pellets can be different colors, depending on the color of the wood termites have been eating.

In most cases, you can find these pellets next to “kick out” holes. 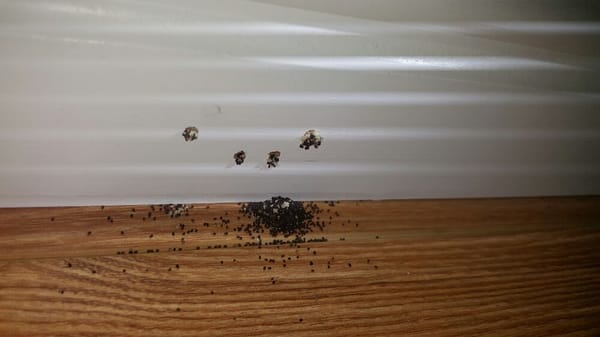 You will typically find termite pellets on doors, windows, floorboards, and under your furniture.

You may also find them around eaves and joints inside attics and basements. 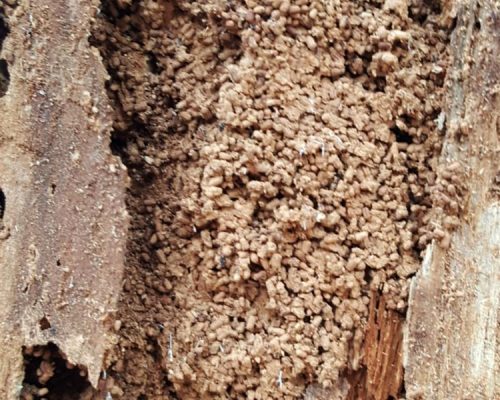 Termites use them to seal entry points around their nest. 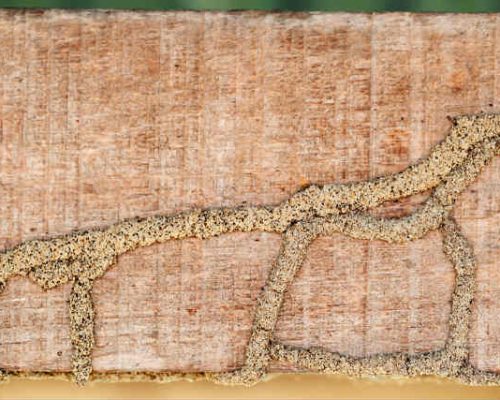 Mud tubes are made of termite feces, saliva, and dirt.

They look like veins running up against your wall or calcium deposits suspended in caves.

You’ll find these tubes on or near the soil.
You may find them near your pipes, in your attic, crawlspace, or along your foundation.